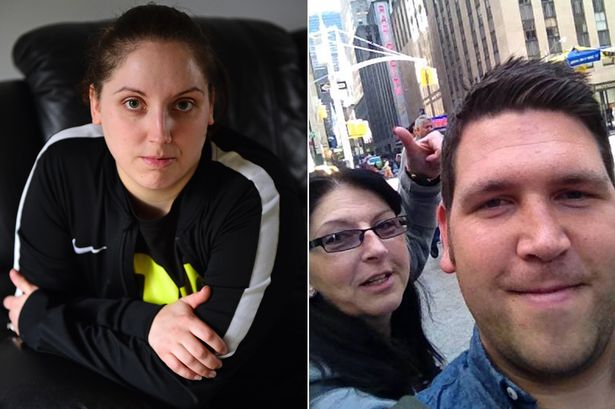 A woman has revealed how her abusive brother who murdered their mother also beat her years before the killing.

Lorraine Bristow, 32, said her brother, Ross Taggart, 36, attacked her and brutally beat her a long time before Ross killed their mother, nursery boss Carol, in a rage.

Lorraine, who had moved out of the family home, was forced to identify her mum, who was 54, from the purple rose tattoo on her wrist because Ross had attacked her face so badly.

Traumatised Lorraine had already been subjected to his abuse before he killed Carol at the family home in Dunfermline, Fife, just days before Christmas in 2014, reports the Daily Record.

She said: “My mum was there and didn’t stop it. Too scared? I don’t know.

“I honestly don’t know why she was so protective of Ross. It was a strange relationship. She would listen to everything he said. I felt like the third wheel. I don’t get why he was the blue-eyed boy.”

The story behind Carol’s killing features this week in documentary Countdown To Murder, which includes interviews with Lorraine, her husband Stephen and her father Shaun Taggart.

Despite killing Carol, Ross has remained executor of his mum’s £350,000 estate. Although the family home has been sold, he remains in charge of her estate.

While the law prevents him from inheriting his mum’s property and other assets, he legally controls them from his prison cell.

Dance teacher Lorraine is campaigning to change the law to prevent convicted murderers from being executors of the estate of the person they killed.

Ross was jailed for life and ordered to serve a minimum of 18 years after being found guilty of murdering the gran of five at their home in November 2015.

He throttled Carol after an argument and she also suffered head wounds. He then hid her body under an empty caravan at a holiday camp in Pettycur Bay, Kinghorn, in Fife.

Having to identify her mother still haunts Lorraine to this day.

She said: “I had to identify her from a little tattoo that was on her wrist, a purple rose – purple was her favourite colour.

“I still have nightmares about that moment. I don’t sleep. It never ever leaves you. None of it does.”

Lorraine, whose dad married single mum of two Carol, said growing up she had been close to her two older half-brothers but particularly Ross.

But his behaviour started to change following the death of his dad in an accident.

By his late teens, Ross was stealing money and other items from family and his work and behaviour caused heated family rows, where Carol always took his side.

The arguments led to the breakdown of Carol’s marriage to Lorraine’s dad, Shaun, leaving Lorraine living at home with just Ross and their mum, who was suffering increasingly from poor mental health.

Jobless Ross started to control everything about his mum’s life including isolating her from family and friends.

He lived off her money and Carol changed her will to leave everything only to Ross.

Police believe Ross killed his mum after she finally saw through his controlling behaviour and asked him to leave.

Ross called Lorraine two days after he killed their mum to claim she had gone missing.

Lorraine said: “In that split moment, I knew in my gut he had done something.”

Ross was arrested just days after their mother’s body was discovered.