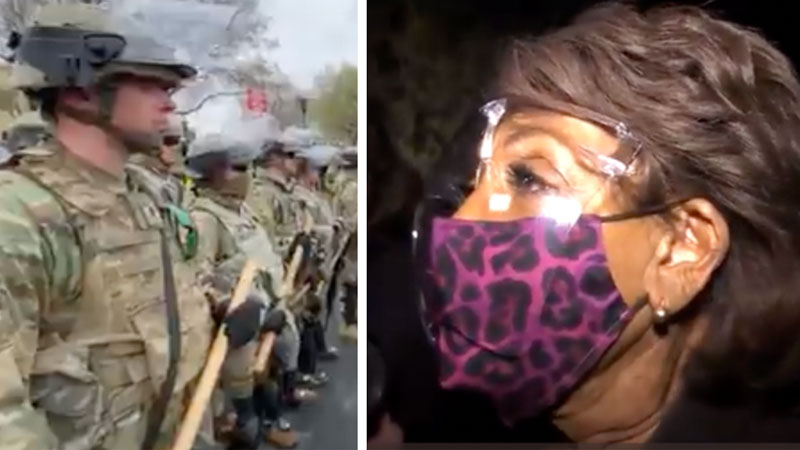 Two National Guardsmen suffered minor injuries early Sunday when they were fired upon as they provided neighborhood security in Minneapolis following the police killing of a 20-year-old Black man in a nearby suburb, authorities said.

According to a statement from the Minnesota National Guard, around 4:20am, someone in “a light-colored SUV fired several shots” at a team of National Guard and Minneapolis Police Department members near Penn Avenue and Broadway.

“One Guardsman sustain an injury from shattered glass requiring additional care and was taken to a local hospital to receive treatment for injuries sustained,” the National Guard said in a statement.

“The other Guardsman received only superficial injuries. No further information is available at this time.”

“I am relieved to know none of our Guardsmen were seriously injured. This event highlights the volatility and tension in our communities right now. I ask for peace as we work through this difficult time,” said Maj. Gen. Shawn Manke, adjutant general of the Minnesota National Guard.

Demonstrators have gathered to protest against the shooting of Floyd amid Chauvin’s trial.

In the suburb of Brooklyn Center, Minnesota, protestors gathered after the fatal shooting of Daunte Wright. Wright was fatally shot by a cop during a traffic stop.

As Waters joined the seventh consecutive night of protests in Brooklyn Center, she told reporters if ex-cop Chauvin isn’t found guilty of murdering Floyd, “we’ve got to stay on the street”.

Waters said she was “hopeful” Chauvin would be convicted of murder, but if he isn’t, “we cannot go away.”

“We’ve got to fight for justice,” she added, saying she is pressing for a police reform bill to be passed in Congress. But she said Republicans would likely stand in the way.

Reportedly, she plans to stay in Minnesota until Monday when closing arguments are expected in the Chauvin trial, according to New York Times reporter Nicholas Bogel-Burroughs.

Waters, a Democrat from California, was speaking to a crowd of nearly 300 people outside the Brooklyn Center Police Station.