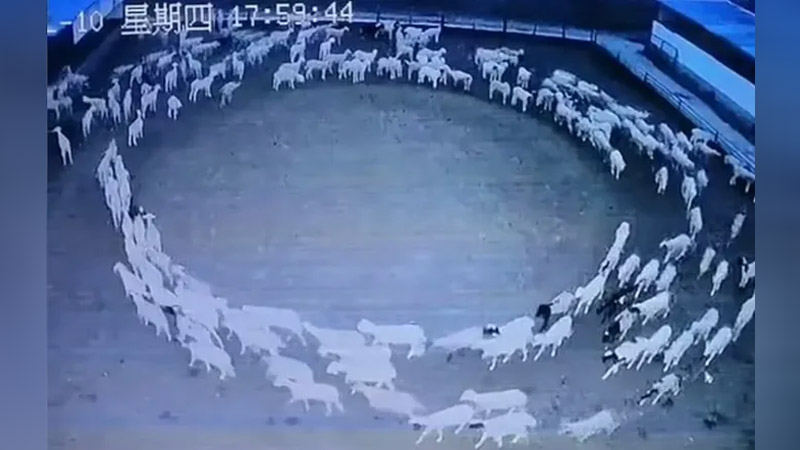 Anyone may smile after seeing funny videos of animals getting into the fun. Their funny emotions and reactions make for some of the finest YouTube and Instagram videos. Some videos, on the other hand, might leave you with a million questions.

For example, in this video from China, a vast herd of sheep is shown traveling in a circle at random, with no guidance or supervision. I’m not sure if this is the sheep’s method of calling Satan or planning a killer wedding choreography.

The video comes from China’s Inner Mongolia area and is part of security footage. The sheep appear to be traveling in an almost perfect circle. Some people stand inside the circle at times, while others watch the performance from a distance.

People are both amused and concerned by the flock’s unusual behavior. Ms. Miao, the flock’s owner, told the Daily Mail that it started with only a few sheep and that more joined in over the days.

She added to the strangeness of the situation by saying that her property has 34 sheep pens, but only the sheep in pen 13 have been circulating in this strange way.

Some people have proposed a plausible explanation for the sheep’s behavior. Listeriosis is a disease that causes inflammation on one side of the brain, causing animals to behave strangely. Because of the effect, it produces on animals, this bacterial illness is also known as ‘circling disease.’

That doesn’t explain why and how just the sheep in enclosure 13 is infected with this sickness.

Some users on the internet have found humor in this strange and disturbing film. The responses vary from seeing it as a means to call the cartoon character Shaun the Sheep to comparing it to a garbage performance.