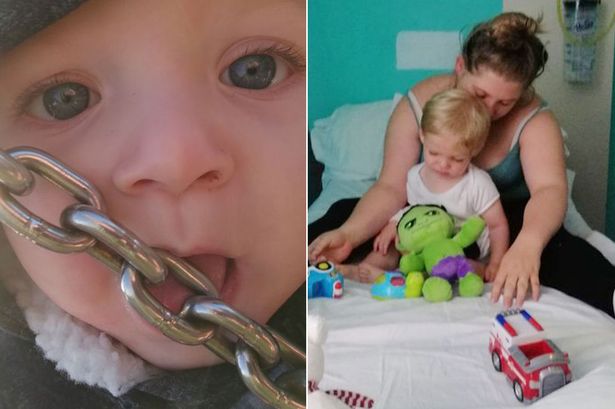 A toddler has died after surgery to remove a large brain tumour tragically went wrong.

Grieving mum Nicole Harrigan described how “cheerful” 17-month-old Sylas had stopped smiling and she and husband Nils initially believed he was teething.

He then began struggling to settle at night and being sick as well as suffering other odd symptoms, including lack of balance.

Several operations were undertaken to save Sylas’ life, with procedures to remove excess fluid and half of the tumour a success – before a third went devastatingly awry.

Doctors later told the couple, from Goldthorpe, Barnsley, the error, which left the little boy with irreparable brain damage during a complex procedure they “never want to see again”.

Nicole said she and her partner wondered if Sylas may have been suffering from a reaction to his jabs, prior to the tumour diagnosis.

The couple, who were living in Chesterfield at the time, contacted their GP but were advised to go to the chemist, where they were then told to go back to the doctor.

During a primary care facility appointment a paramedic then advised the boy might have an ear infection but three days later he was still no better so they went to the GP.

He told them it might be fluid on the hips, possibly due to an infection and the couple were told to monitor him for two weeks while giving him pain relief, explained Nicole.

But when Sylas’ condition worsened, Nils rang the doctor again and took his son back in before they were finally given a paediatric referral to Chesterfield Hospital.

Eventually, Nicole and Nils were able to get a paediatric referral to Chesterfield Hospital and Sylas was immediately admitted, with a CT scan scheduled for the following day.

Following a CT scan the next day, a neurologist told Sylas’ parents they had found a tumour.

Nicole said: “We were in complete shock. I couldn’t understand how this could be happening to our precious baby.”

The family were all taken by ambulance to Sheffield Children’s Hospital, with the journey seeming “to take a lifetime”, the mum said.

Sylas was booked in for emergency surgery the next day to remove a build-up of fluid on his brain which was a success.

The following day he underwent a second op to remove a large portion of the tumour, with Nicole and Nils left waiting an agonising 19 and a half hours from 9am to 2.30am the following morning for their son to come out of theatre.

Nicole said they were “beside themselves with worry” before she called the hospital at 10pm to be told everything was fine but an equipment failure had delay proceedings.

Sylas was taken to the High Dependency Unit (HDU) to recover, with 50 per cent of the tumour having been removed.

Hours later, the toddler was in theatre again with surgeons able to remove another 40 or 50 percent.

However, during the operation Sylas had suffered damage to his mid-brain.

“I was distraught,” said Nicole. “When we saw him, he had an endotracheal tube (ET) in his mouth, which was allowing him to breathe.”

Nicole said Sylas’ surgeon had told the family the team had “never seen such a complex case” and “never wanted to see one again”.

An MRI scan confirmed the news that Sylas’ brain damage was “extensive” and tragically, he was not going to get better.

On November 19, 2019, his adoring parents took him home, knowing he did not have long left to live.

Nicole said: “We were determined to bring him home rather than take him to a hospice. He did really well at home but he required round-the-clock care.

“We lived in a second floor flat, so it wasn’t easy but it was worth all the hardship to have him with us, surrounded by love.

“We would sing to him and pray all the time. We had a lovely time making memories, with walks out in the buggy and play therapists coming round to see us. We were able to enjoy a family Christmas together too.

In February 2020, Sylas began to have fits, an indication that his health was rapidly deteriorating and on February 21, the family said their final goodbyes.

“We knew Sylas was coming to the end of his life. We stayed with him all day, cuddling him, telling him we loved him and singing to him,” Nicole said.

“At 8.45pm (his usual bedtime) on Friday, February 21, he took his last breath. Our hearts were broken,” she added.

With the first year anniversary approaching, Nicole has decided to take on a charity challenge to raise money for Brain Tumour Research.

She will be taking part in the 10,000 Steps a Day in February Challenge, which is something she said she feels she can “still do for Sylas”.

Home and Away recap: Luke Arnold really can act and Colby’s life hangs in the balance