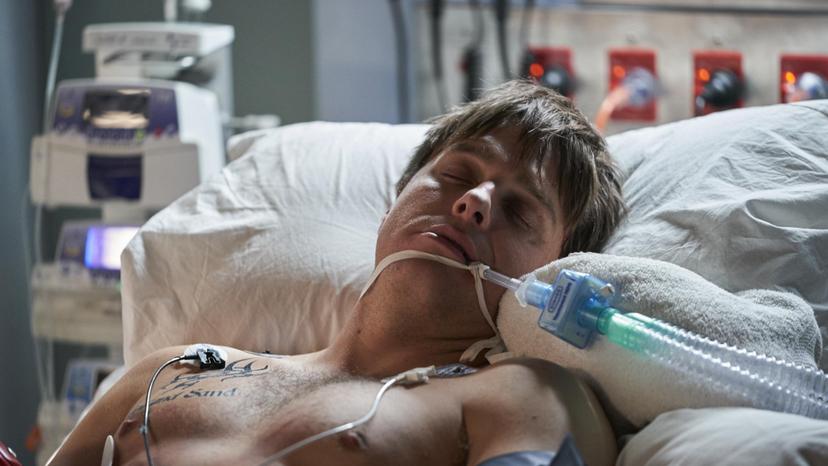 Hello one and all and welcome to the 2021 season return of Home and Away.

After a mighty long recap the show begins and the producers give us exactly what we want, since they know they delivered a lacklustre finale.

It picks up at the jail, and Colby isn’t breathing which is just so artistically juxtaposed by Dean (obviously shirtless with tattoos blazing) and sweeping drone shots of the bay.

Lewis whips out the defibrillator, but Colby can’t be revived.

Sadly we don’t see how Colby ended up in this lifeless state but then I remember this is a family show so affairs, robberies and transporting drugs are allowed, but a shanking would be too far.

Lewis is played by Luke Arnold who joined in the finale last year and has already been dubbed as a poor man’s Johnny Depp. But now I don’t know if it’s now offensive to call Lewis, Depp, since Depp has been “cancelled”.

Anyway, the suspense is disrupted and Colby’s life hangs in the balance because Kieran (Martha’s long-lost son with a violent past) is zhuzhing up his CV which is just thrilling TV.

Kieran drops it off at the gym where he runs into Jasmine again but it’s ok because Jas has decided the put their first and very intense encounter behind her.

Next up is Dean who still won’t visit bestie Colby in jail.

“I’m sure as hell not going to relive that nightmare,” Dean says

It’s apparent Dean hasn’t been back to prison since he was released which is exactly what Bella goes on to say.

Back to the ambulance which hurtles towards the hospital as Colby has a seizure.

Jas gets to work, her other work at the hospital, where Dr Christian Green, aka Budget McDreamy, is briefing everyone about the incoming patient from the corrections facility.

The poor bloke hasn’t heeded my advice and he’s still in the same clothes.

There’s clearly something going on between Lewis and McDreamy because they both throw each other a bit of shade.

I mean it wouldn’t be Home and Away if the new characters didn’t have unresolved problems eating away at them.

Anyway, no surprises that the patient is Colby, but it’s a surprise to Jas who is really showing us a breathtaking range of emotion.

McDreamy pulls Jas aside and tells her she should sit this one out, but she declines because Colby’s sperm is still her best chance at having a baby so he must live.

Read the original article on thewest