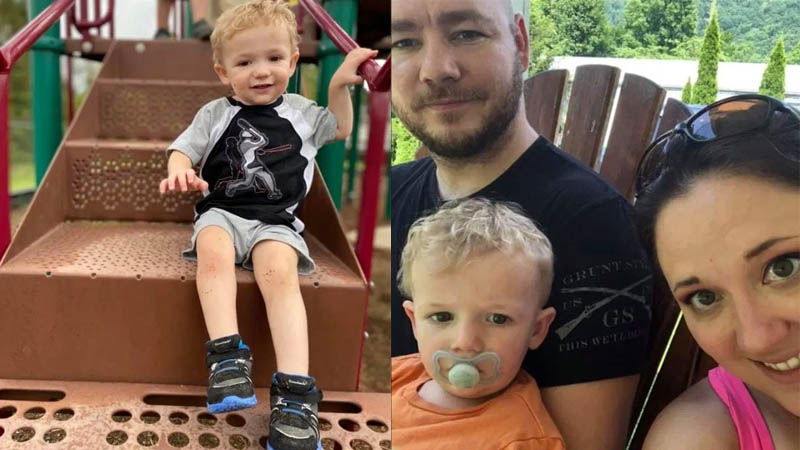 A tot bled to death after swallowing a button battery that burned through his organs, according to repors.

Paramedics desperately tried to save his life but the 23-month old boy died from the injuries.

Jonathon Huff ingested a battery which spent four days burning through his oesophagus, intestines and aorta which led to fatal bleeding.

The toddler, known as ‘nugget’ was from North Carolina in the US, and passed away on December 20, The Sun reports.

He ate the disposable battery without his parents noticing.

His parents, Jacki, 35, and AJ, 34, were said to have believed he had a viral infection as the battery caused a temperature and nosebleeds.

Following two trips to the doctors, the boy began vomiting blood and appeared to be fitting before falling unconscious.

Despite frantic efforts to save him, he died, and an autopsy found the button battery in his intestines was from a ‘key finder remote’.

But they can badly injure or even kill a child if they ingest them.

The deadly reaction is caused by the saliva creating caustic soda when it reacts with the button battery – the chemical used to unblock drains.

It can burn a hole in the throat, cause internal bleeding or even lead to death.

Larger lithium ‘coin cell’ batteries are the most dangerous.

Governmnet advice lists protecting children by storing batteries securely, learning which gadgets and toys use them and checking the home.

Also, disposing of dead batteries and teaching older kids about the dangers, are also advised.

If you suspect a child has ingested a battery, symptoms may not be obvious at first as they may be coughing, gagging, drooling or pointing to their tummy or throat.

Official advise is to call 999 for an ambulance or take the child straight to the nearest A&E department if you think a child has swallowed a battery.