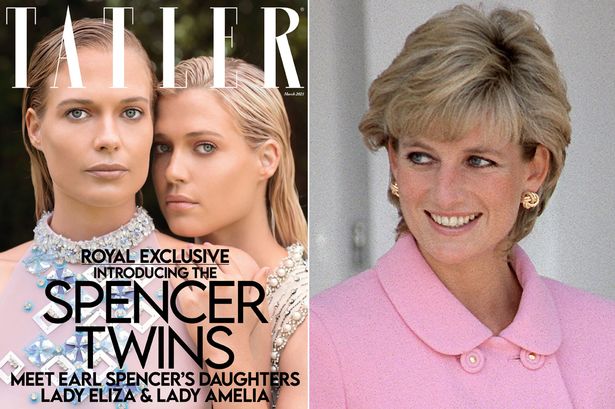 Lady Amelia and Lady Eliza Spencer, who feature on the cover of March’s Tatler magazine, were five when their dad’s sister passed away.

The women, now 28, grew up in South Africa but spent the first three years of their lives at Althorp, the Spencer family home, during which they spent a lot of time with Diana.

Eliza recalls a day out to Noordhoek, a beach known for its freezing water, when the group were approached by a photographer.

To ensure her nieces didn’t get scared, Diana turned it into a fun game and they were clueless to what was really going on.

Eliza tells the magazine: “Obviously it could have been quite terrifying for us, being so young and not understanding what was happening.

“But she turned it into a game of who could get back to the car first.

“It was amazing how she protected us in a way that made us feel safe and not frightened.

“We had no idea what she was doing at the time.”

Speaking about Diana’s death in 1997, she adds: “As a child, I realised the enormity of the loss for my father and family.

“It was only later that I came to understand the significance of the loss of her as a figure in the world.

“We always just knew her as our aunt. Growing up in South Africa, I really had very little idea of how significant she was in the world until I was much older.”

She says her aunt was “incredibly warm, maternal and loving”, adding: “She always made an effort to connect with us as children and had a talent for reading children’s hearts”.

The women spent their summers at Althorp with with father and other members of the Spencer family.

Eliza says: “It is a truly special and beautiful place. Having spent the first three years of our lives at Althorp, exploring and discovering it as children, and being part of a long heritage of Spencers that have lived there, it has always felt like another home.

“And of course it conjures up memories of family Christmases as children, with our extended family all together.”

And it’s been suggested that the stunning property could be the perfect venue for Amelia’s wedding to Greg Mallett, but she’s not sure.

“We would be very lucky to get married there, but Cape Town is where we grew up and there is a possibility that we might do it here, too.”

Amelia and Eliza have also been extremely close and are still best friends.

“You’re guaranteed to have a best friend there always – you can’t really compare it to anything else.”

The woman also speak passionately about mental health and the importance of speaking out.

Eliza says: “It was never something that we felt afraid to talk about when we had our own struggles.

“We were a very open family. We have come a long way in terms of the conversations, and I hope there will come a time when the stigma is completely removed and that people will be able to ask for help and not feel judged for having mental health issues or struggling emotionally.”