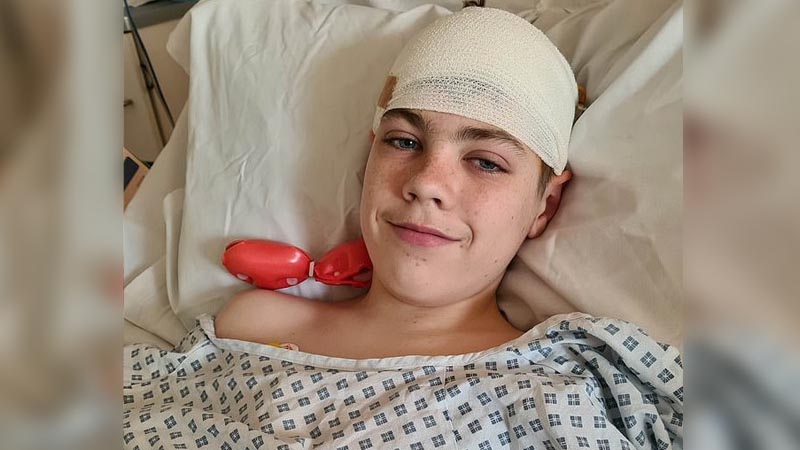 The 15-year-old boy was given a heartbreaking diagnosis after testing positive for Coronavirus and doctors mistakenly assumed he was suffering from migraines caused by long-Covid. Doctors later discovered that the young child had a possibly deadly brain tumor after misdiagnosing him with long Covid.

Kane Allcock, a 15-year-old boy, began experiencing persistent headaches after testing positive for coronavirus in December 2021. His parents reportedly took him to the hospital, where tests revealed no problems. Unfortunately, doctors mistakenly assumed he had migraines caused by long Covid, according to the Daily Mail. Only a few weeks later, the child began to experience more severe headaches and struggled to walk.

An MRI scan revealed that Allcock had acute hydrocephalus, a buildup of pressure on the brain caused by an excess of cerebrospinal fluid. In addition, the doctors discovered that the boy had a large tumor. The young boy also had an 8-hour surgery to remove the tumor and is currently recovering.

During an interview with the Daily Mail, Kane’s mother Nicki, reportedly said: “We took him to a nearby walk-in center. They did a full examination and concluded that he may have been suffering from post-Covid vertigo and he was given codeine.

But the following day, Kane was feeling too poorly to play football, so we took him home and they went straight to A&E. I knew something wasn’t right. Kane was holding his head and rocking in agony. He couldn’t walk properly. They did some blood tests and put him on oxygen and IV pain relief. The next day, Kane had a seizure, and was sent for an MRI scan of his brain which revealed the tumor.”

On 19 April, he went into theatre, and thankfully, Kane’s amazing surgeon managed to remove it all. Kane was discharged just four days after the operation, but on 25 April, he had a wound leak, which meant another trip back to Alder Hey, where he had a couple of extra stitches added.

The wound continued to leak and during a routine follow-up appointment on 27 April, it was decided Kane needed to go back into surgery to re-suture the wound. It didn’t end there, because they also discovered his hydrocephalus had flared up again and he had to have a spinal drain inserted to fix that.”

State Finalizing Plan to Immediately Give Illegal Immigrants Checks of Over $20,000