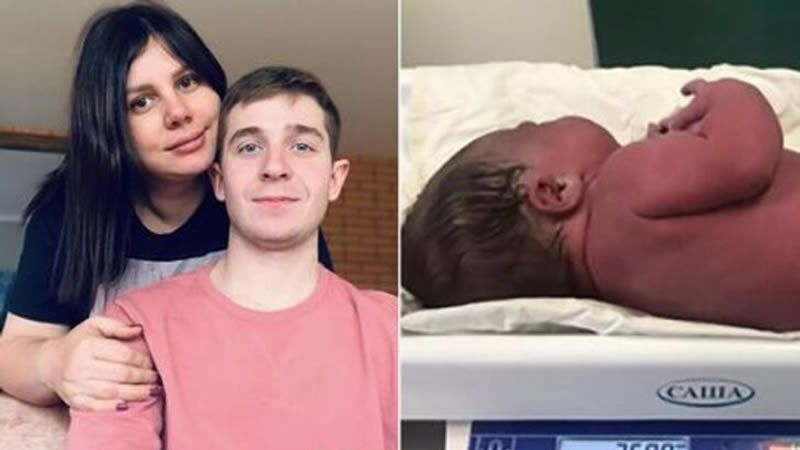 A Russian influencer has shared the first picture of the daughter father by her 21-year-old stepson.

The blogger has known Vladimir since her was seven after she was previously married to his dad Alexey Shavyrin, who now cares for their five adopted children.

After divorcing Alexey accused his ex of seducing his son when he came home on holiday from university, and the couple revealed this week they are still not speaking despite the birth of his grandson.

Marina, who has more than half a million Instagram followers, told the social media site: “I think he does not like what we have done.”

She recently shared pictures and a video of the couple with their newborn baby.

Marina told how ‘wonderful’ life as a new mother is, and how much ‘happiness’ her new daughter brings despite ‘difficult moments’.

Marina caused a stir last year when she shared a snap of her posing next to Vladimir when he was seven years old. Alongside it she included a photo of the happy couple today.

The new mum said: “You never know how life will turn out and when you will meet a person who makes you smile. I know that some will judge us, others will support us, but we are happy and wish you to be as well.”

Marina and Vladimir’s little girl was born in January in the maternity hospital in the city of Krasnodar, weighing slightly over 8lbs.

Her new husband Vladimir was not present at the birth. It was unclear if this is due to COVID-19 restrictions or personal choice.

Marina’s ex complained that “she seduced my son. He had not had a girlfriend before her.

“They were not shy to have sex while I was at home.

‘I would have forgiven her cheating, if it wasn’t my son. She was running to my son’s bed from our bedroom when I was sleeping.

“After that she was coming back and lying in bed with me as if nothing had happened.”