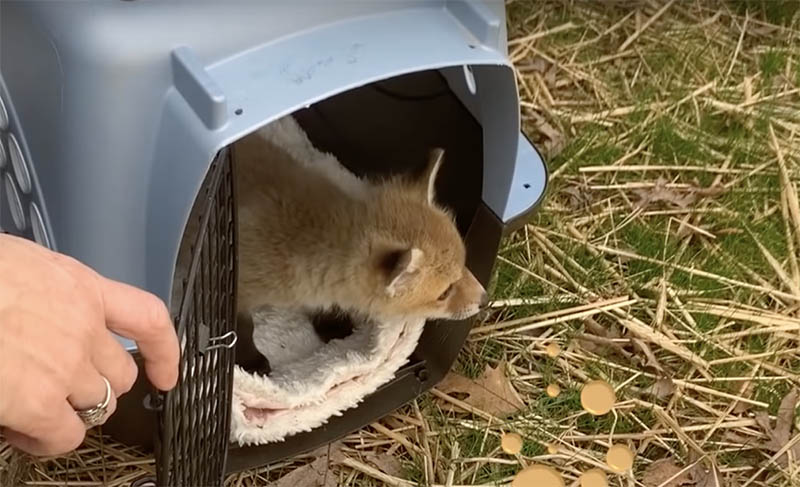 Ruby, a rescuer with Carolina Wildlife Conservation Center, or CWCC, received a call about a baby fox that needed her help. The poor kit had been washed out of her den by a storm and was all alone. Ruby drove over immediately.

When she saw the baby, her heart broke for her. She was very sick– the tiny one was wheezing and coughing like crazy.

Ruby took the baby, she named Butter, to the rescue center and the fox received medical attention immediately. Thankfully, within a few weeks, the baby fox was all better! Butter became playful and happy but Ruby was concerned.

A fox needed to be around other foxes or she would imprint on humans and it would be that much harder to release her back into the wild, or keep her amongst other foxes in a sanctuary.

CWCC got another call about a baby fox named Toffee. Which was pretty amazing because Butter kept looking for a friend to play with. Was this fate intervening? Hmmm.

We think so too! Toffee was the sole survivor from a fox family that was tragically killed in a car accident. They all crossed the Rainbow Bridge but Toffee managed to pull through. She was quite the little warrior!

It was only natural to put Toffee and Butter together so they could bond but not even experienced rescuers know for sure if the kits will get along.

They nervously put Toffee up against the fence of Butter’s enclosure. The rescuers said some prayers and then…  Well, to find out the rest, you have to watch the video and see for yourself! It’s pretty amazing! Check it out below.

Want Another Stimulus Check? One Idea: Get Vaccinated, Get Paid?