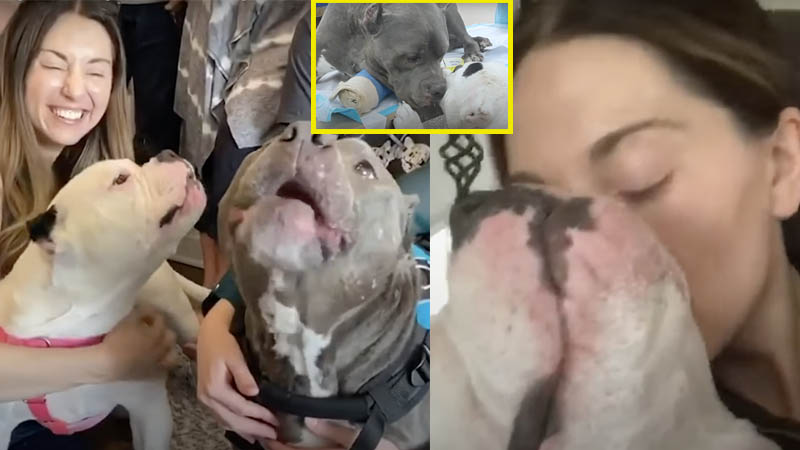 Two Pit Bulls tragically lost their dad during a freak accident while hiking. Their dad, Kris, died on impact. The dogs miraculously survived but one was badly injured. Both dogs stayed with their father until all three of them were found.

Tonka broke both of his front legs. After arriving at the animal hospital, Tonka’s brother, Little P, refused to leave his side. Tonka was on a stretcher getting ready for surgery and Little P was beside himself. He had no idea where they were taking his brother and if he’d ever come back. Little P kissed him goodbye, just in case.

After surgery, both of Tonka’s legs had to be in casts. He couldn’t get around much and the vet ordered strict instructions, saying he couldn’t play. Because of this, the dogs had to be separated. Tonka went to a medical foster home where they could address his needs. Chrysti, Kris’s cousin, took in Little P.

Little P had never been without his brother before and this surely took a toll on him. Chrysti did her best to comfort him, knowing this was a temporary separation. But, of course, Little P still struggled. Tonka also had a hard time adjusting. He was ten years old and was always at Kris’s side. Now he was without his brother and his dad.

Chrysti wanted so badly to keep them both but she couldn’t. They already had several dogs and this wasn’t a possibility. She wanted to find them a family who could give them a similar life Kris had where they could be outside often and go hiking. After going through dozen of applications, Chrysti finally found a family that could take both dogs and give them as close to a perfect life as possible.

Their adoption day was a huge deal. Not only were they going to meet their new family but they were also going to be reunited. When they saw each other, the two dogs’ tails wagged like crazy. It was as if time never passed.

Chrysti’s entire family decided to come together to introduce Tonka and Little P to their new parents. This is when something truly magical happened! It was such a beautiful, emotional moment that Kris’s family couldn’t help but cry. The story just gets better from here. You do not want to miss out on this story. And thanks to The Dodo, you don’t have to! Check it out below.

How could scientists develop COVID-19 vaccines so quickly?