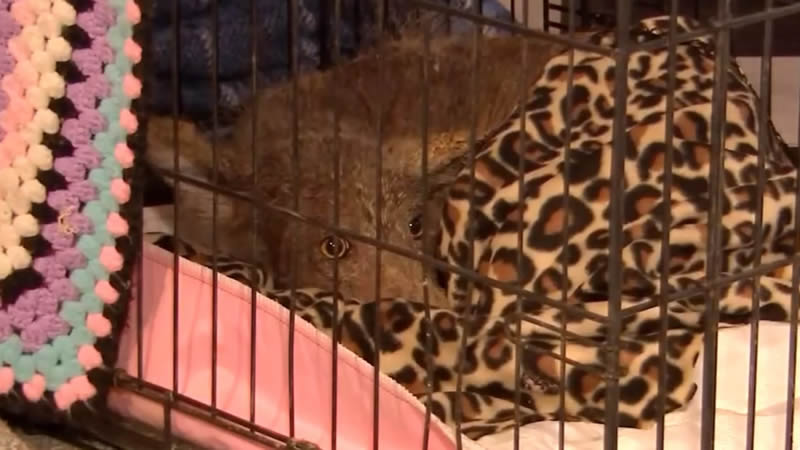 A woman in Pennsylvania has experts flummoxed by the animal she discovered outside of her home.

Christina Eyth rescued the animal earlier this week near her home in Fairfield Township after finding paw prints outside of her door. Eyth followed the tracks, assuming they had belonged to her neighbor’s dog after they had gotten loose. The tracks ended up leading her to directly an unidentified animal, which Eyth said was exhibiting “scared behavior.”

“I peeked outside the door and that’s whenever I noticed the animal on my left-hand side and it was so scared and so cold and shivering,” Eyth recalled in an interview with NBC News. “… All I could think about is ‘This animal needs help.'”

Rescuing the animal was one thing: Eyth was able to lure the animal into her basement and out of the cold. Since then, though, the animal has been a mystery.

Eyth said that first, she thought the creature might be a coyote or a dog. After calling Wildlife Works, a local rescue, and transferring the creature to their facility for care, there have only been more questions.

Morgan Barron, a certified wildlife rehabilitator at Wildlife Works, had trouble identifying what this animal could be and told NBC News she couldn’t “definitively say what it is.”

“But to err on the side of caution since they can carry rabies and since it might be a coyote, we can keep it here, get genetic testing done, and then kind of go from there,” Barron explained.

Barron said that since the animal’s behavior is on the timid side and it isn’t exhibiting signs of aggression, she believes that the animal may be a dog. In the meantime, the animal is currently being treated for mange and is being kept in isolation.

Golden Globes boycott: Why is the ceremony so controversial?

Your Pet Grooming is No More Tiresome