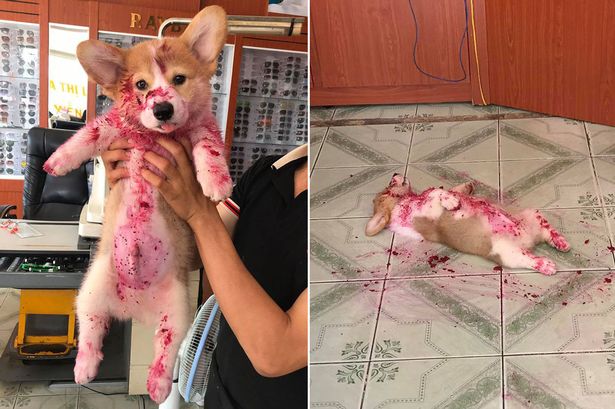 The sight of Gody the corgi laying motionless in a pool of red liquid may appear to be highly distressing, but thankfully it couldn’t be further from the truth.

The adorable little doggo understandably scared the life out of his owner, who walked into the room to find Gody resembling a deleted scene from a budget version of The Godfather.

It turns out that the mischievous two-month-old pup has simply found his way into a supply of dragon fruit, gorged on it until he could barely move, rolled around in the remains, and then pretended to be dead.

The pictures were shared on Facebook, leaving thousands of others shocked and angry until they realised that Gody, who has a strange habit of napping flat on his back, had simply overdone it on the snacks.

The images racked up more than 8,900 shares and 4,000 comments as people flooded to the post to share a laugh at their own mistake.

One replied: “When I saw this my first thought was ‘why would you post this?’ Then I read what happened. LOL My Chewy would do something like that. He has corgi in him.”

Another commented: “He’s so darn adorable! I’d probably have nearly had a heart attack at first until I realized it was jelly all over him.”

Gody lives in Vietnam with his owner, who told Bored Panda : “Because he’s a baby, like other baby dogs, he likes to get himself dirty and sleep a lot. He also loves to eat fruits.”

The owner posted about Gody on a page which was named after his mum, and is used as a place to share updates about the dogs and bring some joy to people during their busy days.

More than 75,000 people follow Gody, and you can become one of them by clicking here.

She Lost Her Way, Overheard Dad’s Engine & Bolts Toward Him Shedding Tears