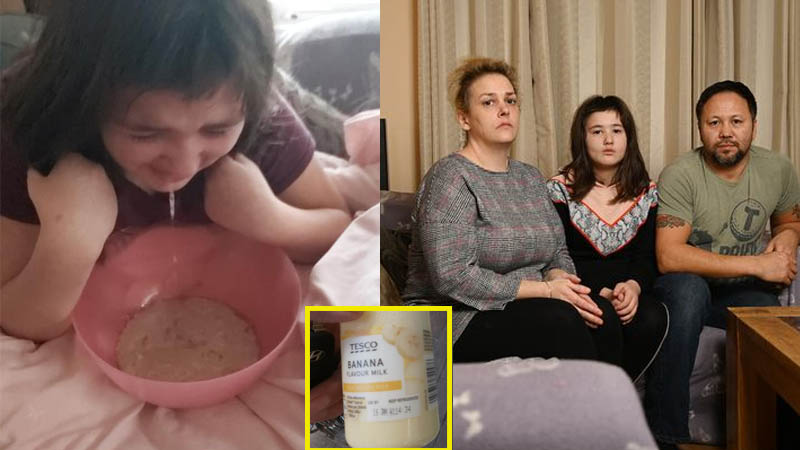 A dad has blamed a supermarket milkshake which he says “tasted like bleach” after catching the moment his daughter fell violently sick on camera.

Ten-year-old Layla became ill after her father, Asad Rezahi, bought her a bottle of own brand “Banana Flavour Milk” from a Tesco superstore in Roborough.

After a few sips, the youngster rushed to the kitchen sink where she started coughing and vomiting.

Worried about what could be in the drink, her parents each had a gulp to check themselves – and were both sick.

The family managed to photograph Layla’s bout of sickness and report the incident to a member of staff at the store.

Likening the taste to “chemicals” and “bleach,” Asad has urged other families to steer clear of buying the same product.

After the discovery the father says he rushed back to the store where he confronted a member of staff who also tried the drink.

The worker agreed it “wasn’t right” and sent it off to be tested, Asad told PlymouthLive.

“For some reason, as soon as she tasted it, she straight away ran for the kitchen,” Asad said.

“She was coughing and throwing up constantly. She was crying, she couldn’t even breathe.

“She was panicked, we tried to calm her down and got her to drink some water. She said the drink tasted slimy. She was sick again another four to five times.”

Tesco has since apologised for the incident and has asked its supplier to investigate the problem immediately.

Asad said he had the banana milkshake for his daughter many times before and had never encountered the same kind of problems.

The bottle he gave his daughter on Sunday was “well in-date” and was fully sealed, he said, so he had no reason to believe it was unsafe to drink.

He added: “My daughter has no allergies and no issues, she’s a very healthy girl and loves her food. I often buy it, but usually in the big bottles.

“I bought four different flavours, chocolate, strawberry, banana, vanilla, I gave the banana one to my daughter Layla.”

“She was coughing and throwing up constantly,” Asad said. “She tried to get rid of as much [of the drink she had swallowed] as she could.”

He rushed back to the Tesco supermarket to speak to a manager and report the issue, in a bid to persuade staff to take the product off the shelves and potentially save other customers the same fate.

“I drove back to Tesco straight away, I only had ten minutes before the shop would close [as it was a Sunday].

“I spoke to a manager and asked her to taste it, she agreed it wasn’t right and said it smelt like bleach. She took the bottle and said she would send it to be tested,” he added.

Meanwhile, Layla’s mother Katie had called NHS 111 and had soon been advised to take Layla to hospital.

“Parents need to check things first. What would happen if it was a child who couldn’t speak or an elderly person [drank the unsafe drink]?” he said.

He has urged anyone who has purchased the Banana Flavour Milk from Tesco recently to “take it back”.

“She was discharged and we were asked to come back if she was ill again.”

Since going to hospital, Layla has experienced further stomach pain but it is understood she hasn’t been sick since Sunday.