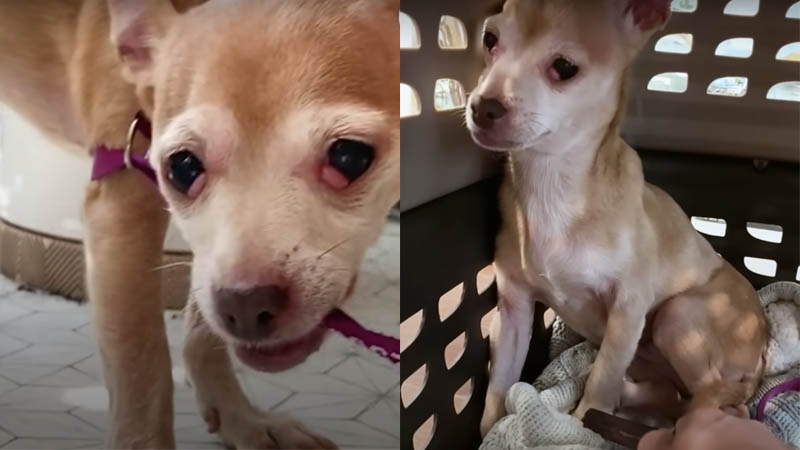 As they say, it’s not the size of the dog but the fight in the dog that counts. And boy can that be true. One little dog that really needed a second chance wasn’t able to get one because she was a bite risk. A rescue group reached out to as many fosters as they could and explained that she had a tendency to bite. No one wanted to take the chance.

That is until one woman, named Niko, couldn’t fathom leaving the little dog without a foster home. She knew it wouldn’t be easy but she was up for a challenge. When she picked the dog up in her crate, she could see that the dog was afraid. She postured herself tight in the corner. Niko thought it would be less traumatic if she just left the crate door open and see what happened next.

But the little dog wouldn’t budge. Knowing she’d go after her hand, Niko used a treat to gently pet her. It seemed to calm her down a bit. They drove to Niko’s house and this is when things became challenging. How would she put a leash on her and take her out for a walk without getting bit? Well, Niko just had to get creative!

She used a roll of paper towels to prop the dog’s head up, away from her, as she carefully placed the harness around her little body. Boy was that nerve-wracking! But once they went outside for a walk, it was like something clicked and the dog felt safer. When they got back home, she even laid close to her new foster mom.

Niko was still hesitant to pet her since she did try to bite her a few times but with persistence and kindness, she earned her trust. She would pet her down by her backside gently. The dog understood from Niko’s gentle hand that it was all going to be okay.

A month later, the little dog had totally accepted affection. It was as if she was reborn! Now all Niko had to do was find her a forever home. Would people be afraid to open their hearts, and home, to a dog that has bitten people before? Would she get her second chance and live a fruitful life? To see what happens next, check out the video below.