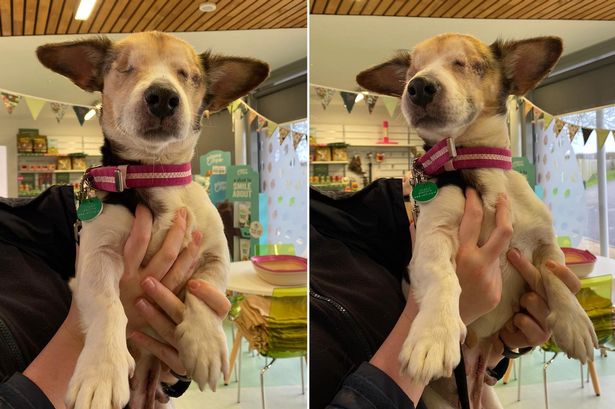 A blind dog who was found “traumatised” at a train station is looking for a new home after her previous owners abandoned her.

Penny was discovered at a train station in December by a member of the public and taken to Cotswolds Dogs & Cats Home in Cambridge.

The rescue centre said the experience would have been “traumatising” for “terrified” Penny, who was “clearly suffering” at the time, the Gazette reports.

Haley Medlock, who works at the centre, said Penny quickly received the care she needed and it became apparent the dog had Glaucoma.

Vets monitored Penny closely but sadly there wasn’t anything they could do to save her eyesight, so she had to have her eyes removed.

Jane, who also works at the centre, said Penny has been “adapting to her new way of life so quickly,” and is no longer in pain.

She said: “From the day Penny was rescued she’s been happy, bright and always wagging her tail.

“She never seemed distressed staying in the kennels with the vet whilst undergoing treatment and would get very excited with a nurse or vet coming in to check on her.”

Penny is now living with a “wonderful” foster family who are helping her to “adjust to life with no sight” and recover “from her major surgery.”

The Cotswolds Dogs & Cats Home is looking to find Penny a forever home for her, however, and have asked anyone interested to keep an eye on their Facebook page for further updates.

The Cotswolds Dogs & Cats Home in Cambridge helps hundreds of animals every year and each animal receives a health check, flea/worm/tick treatment, vaccinations, neutering and micro-chipping if needed.

Many animals, like Penny need further treatment which is vital to their health.