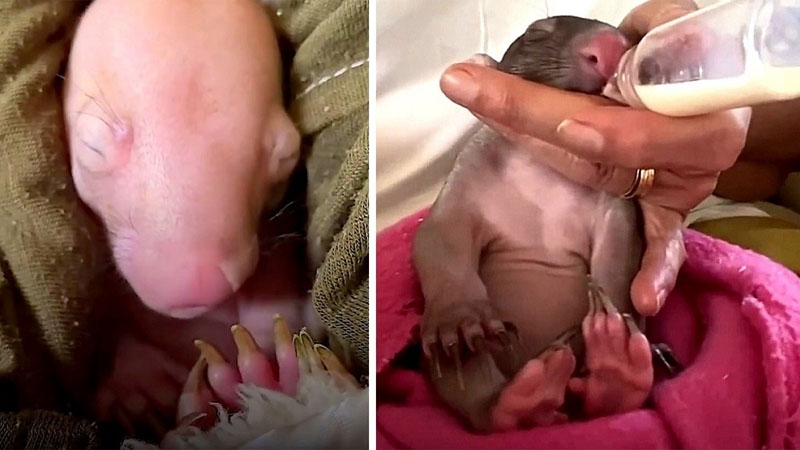 A wildlife rescue service based in Canberra, Australia, where Lindy is an animal welfare operator who constantly works on rehabilitating animals rescued by ACT Wildlife. Moreover, couple of months ago, under the care of ACT staff, Lindy heard about a dying “pink bald creature”.

She quickly knew she had to help the poor thing. Specially ACT workers were alerted about a dead wombat lying on the roadside after a hit and run. Meanwhile, when they went to look into the spot, they were frightened to find a tiny baby wombat sticking to the pouch of her dead mama. Her survival seemed very unlikely then they named the baby wombat Sylvie and took her to the rescue.

It is said that due to her devotion to protecting these marsupials Lindy often gets called the “crazy wombat lady”. For the past few decades, it seems she has been raising injured and at-risk wombats. So, they knew she was only her hope. She had no idea if the motherless baby would make it. Lindy instantly took Sylvie under her responsibility. 8-9 months Wombat babies take to grow in their mother’s pouch.

She looked like a pink blob who was yet to open her eyes. By living alone Sylvie was just 4 months old and weighed around 13 ounces. Which is the same as looking like a normal human baby. Her tender skin and underdeveloped body made her fragile made like a human baby.

However, Lindy’s devout dedication to helping Sylvie not only endure but also a good gesture! This lively woman is nothing less than a guardian angel. Like a true wombat mother, she not only saves Sylvie’s life but also prepares her for her natural habitat.