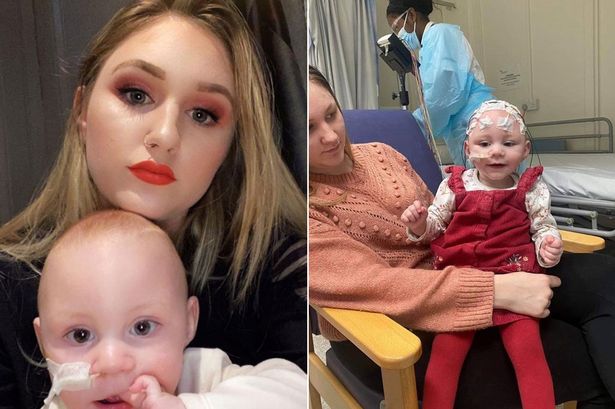 Alarming news has been reported in Leed where a young mother gave birth to her daughter and suddenly her infant being disabled, she was unable to walk or talk after contracting common cytomegalovirus (CMV).

The virus which causes cold-like symptoms in kids and adults and transferred in saliva, tears and urine – is usually harmless however it van be brutal to an unborn baby. she barely left her bed for four months and is now 14 months old.

21 years old Courtney said “ if you catch the CMV in the first stage of pregnancy it can have horrific outcomes.

“You can catch the virus through changing nappies and bottles, that I was doing regularly as a carer for both kids and adults, as well as just not washing your hands.

“You don’t even notice it if you’re not pregnant, but nobody ever warned me about it.

“I was mortified when I found out I could have caught the virus through my caring work.

“I don’t know how I caught it and I never will- it’s the worst part about CMV, it’s all unknown.”

Mum who visited the hospital just after completed 12 weeks of pregnancy, get shocked when the doctor told her unborn baby had fluid on the brain – a sign of CMV – but it quickly disappeared. Eventually, she gets some solace but after completion of 20 week  “everything was wrong” and little Minnie-Mae had severe brain damage, and liver and kidney problems, due to CMV.

Courtney said: “They told me she would never breathe on her own.

“It was like, bang, something just hit me in the heart.

“They told me to terminate the pregnancy, that I was really young and would be her carer for life – but I was a carer anyway as my job so I didn’t want to give up.

“I was in a horrendous way then – I didn’t get out of bed for four months and had to shave all my hair off because it got so matted.

“Everybody was supportive of my decisions to continue, but because none of them could ever relate to the pain I was feeling I think they felt awkward about what they could do.

“I will never forget my mum saying to me ‘There’s just nothing in you anymore’ – it was the worst time of my life.

“Every week I was going for scans to check for a heartbeat until they sent me home to prepare to for her to die inside me and give birth to a dead baby.

“I was told she wouldn’t make it overnight because she was in horrific condition, but I never gave up hope for Minnie.

“I needed to be positive because if she was fighting I knew we were going to be OK.

“Something was always telling me that she wasn’t going to be as she said.

“She had the strongest heartbeat and was kicking a lot; how would she be doing that if she was so severely ill?

“I knew I wasn’t going to give up, if I couldn’t give her a chance then nobody would, so I started trying to be a bit more positive and get out of bed.”

At 29 weeks, unborn Minnie’s condition started to improve, and scans showed she was growing again, and it gave Courtney and the doctors hope.

After four days she was taken off life support in St James’s University Hospital, Leeds, and defied odds to breathe on her own.

“We were in the unknown then as to whether she would be blind, deaf or even start moving,” said Courtney.

And while doctors predicted she’d be in hospital for three months, she came home after just three-and-a-half weeks.

Courtney was trained to feed Minnie-Mae through a tube in her nose which she still has now.

Courtney said: “Minnie has had about 100 doctor’s appointments in her life and, although not yet diagnosed, is likely to lose her vision and hearing over time as well as potential cerebral palsy.

“Although she has all this she’s a very happy baby and learning new things every day.”

She said: “I get messages every day from people who caught it during their pregnancy and were diagnosed, but that was nothing like when I was pregnant as I felt quite alone.

“I feel lucky as Minnie is a lot more well-off than most CMV babies, as whilst she can’t crawl, walk or talk, she can sit up even with her severe brain damage.

“A lot of CMV babies I hear about through the group are blind, deaf, quadriplegic or on end-of-life care.”