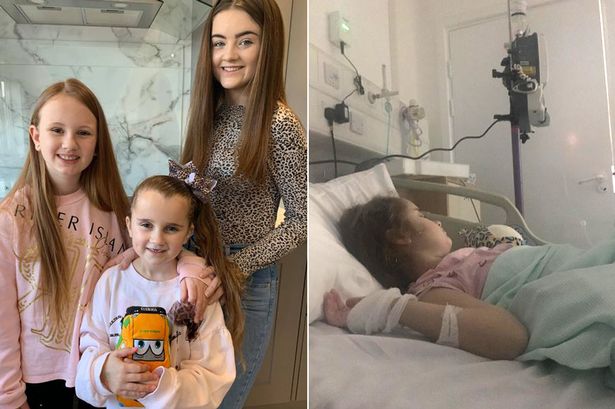 A terrified mum has spoken of her fear of losing her young daughter after she was rushed to hospital after developing an unusual syndrome linked to coronavirus.

Sienna McGuire’s family did not know the seven-year-old had ever contracted the disease as she had not displayed any symptoms at all.

But after mum, Debbie, spotted worrying signs of Paediatric Multisystem Inflammatory Syndrome (PIMS) which is associated with Covid-19, she rushed her daughter to hospital for treatment.

PIMS is very rare and most children will not be seriously affected but in some circumstances it can be serious and even life-threatening.

Similar to Kawasaki disease, it can affect children two to six weeks after they’ve been exposed to Covid-19, even if they did not have any symptoms at the time.

At one point, Debbie feared she would lose her daughter.

She said: “We hadn’t even realised that she’d had coronavirus – she had no symptoms.

“There was an outbreak at her school before Christmas when seven children and a teacher tested positive, but Sienna never showed any symptoms.

“It was weeks later on January 8 when she started being sick and got a high temperature.

“On Sunday night (January 10), she was burning up and she came into my bed.

“As we were watching TikToks together, the light from the phone made me realise her lips were bright red.

“I remembered reading about children with Kawasaki disease after Covid and knew that this was a sign. I asked Sienna to stick her tongue out and she had the bright red strawberry-looking tongue.

Debbie took Sienna, from Grimsby, to the town’s Diana, Princess of Wales Hospital, where doctors initially suspected a bacterial infection, not anything Covid-related.

She was put on a course of antibiotics through a drip but her temperature rose to 39.5 and she could barely stay awake.

A Covid test which she had the previous day came back negative.

The following day her condition deteriorated and doctors decided to transfer her to Sheffield Children’s Hospital.

Debbie said: “I was so scared of losing her at that point.

“I’d been trying not to cry so I didn’t worry Sienna, but it all came out as we drove to Sheffield.”

By the time they arrived at Sheffield, the antibiotics had started to work and Sienna was looking better,

Debbie said: “The consultant explained to me that she suspected Sienna had something called Paediatric Multi-System Inflammatory Syndrome which is related to Covid-19 and causes inflammation around the body, and can cause tissue damage or organ failure.

“She told me that she’s seeing five or six kids a week with this and that they do recover.

“She told me that Sienna will have lots of tests over the next few days and to expect to be here for quite a while.

“She also said that I had done well in spotting this when I did, as lots of children don’t come until severely poorly.

“And if Grimsby hospital hadn’t ordered blood tests, they wouldn’t have spotted the inflammation markers which showed it wasn’t just a temperature.”

Debbie has urged parents to be alert to the symptoms for PIMS, even if they don’t believe their child has had coronavirus.

She said: “I was very lucky to have known the signs and got her help so quickly.”

“It’s especially difficult when most families don’t ever know if their children’s been infected with coronavirus.”

She will have further check-ups to monitor any long-term effects of the condition or from having Covid.

Ben Affleck & Ana De Armas To Split After Having Huge Fights Because Of The Justice League Star’s ‘Neediness’? – Reports