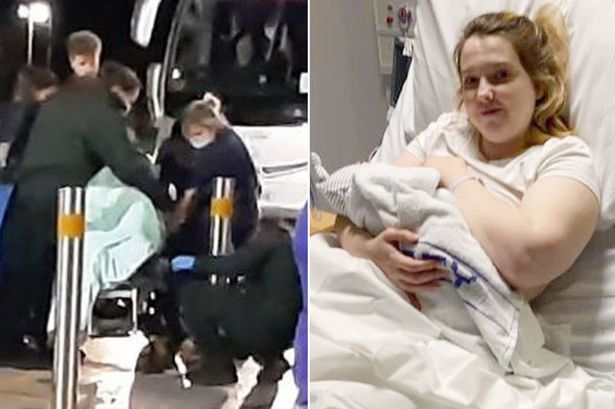 A mum gave birth to her baby boy in the car park of a hospital on its opening day.

Chelsea Waite and partner Ieuan drove to the new Grange University Hospital from their home in Blackwood, Caerphilly yesterday when her contractions increased.

All was going to plan until they got to about two minutes away from the hospital, Wales Online reported.

The 26-year-old mum said: “We were just about to park in the main car park and walk in together when suddenly my waters broke and I could feel the baby’s head.”

Luckily for Chelsea Dr Chris Chick, a consultant radiologist, was passing and heard her screams.

Despite not having delivered a baby in 25 years he rushed over to help.

He called for assistance and managed to deliver baby Flynn safely.

The doctor kept the newborn warm until midwives and Welsh Ambulance Service staff arrived on the scene to take over.

“I can’t believe how quickly Flynn came,” said Chelsea, who is also mum to 15-month-old Freddie.

“From my waters breaking to him being born, the whole process was around five minutes.

“We were in shock because I was in labour for more than 16 hours with my first child.

“I was on all fours outside the car and Dr Chick managed to catch Flynn as he came out.

“Dr Chick and the other staff were amazing – they came to help me so quickly.

“It’s something for Flynn to be told about when he gets older – we can embarrass him when he gets his first girlfriend.”

Once mum and baby were taken to the Maternity Unit inside the new hospital, Flynn weighed in at 7lb 12oz.

Chelsea added: “The hospital is lovely and I was so relieved to be in such a modern and safe environment.

“We had a private en-suite room so I could take a shower and I immediately felt better.

“When I video called my family, they thought I was telling them I was in labour – but they were shocked to see Flynn already in my arms.

“After all the drama outside the hospital, it was very calm and relaxing and I was home by 10.30pm the same evening.

“I’ve seen these things happen on the TV, but I never thought it would happen to me.”

Biden Thinks Border Crisis is a Joke, Says He Is “Flattered” by Migrant Surge Because He’s a “Nice Guy”