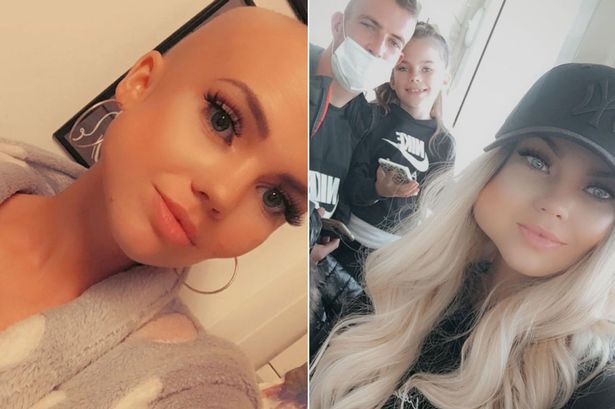 A mum-of-one was diagnosed with a rare cancer on a Zoom call with her doctors after lockdown cancelled medical appointments.

Kimberley Eccles, 23, was diagnosed with Rhabdomyosarcoma in August 2020.

The disease is a rare type of soft tissue sarcoma cancer that grows in the voluntary muscles of the body, according to Macmillan Cancer Support.

Initially, she thought she was suffering from an ulcer on her face, after noticing a small growth on her cheek that was then left undiagnosed.

But the woman received her cancer diagnosis on a Zoom call with a doctor after missing three medical appointments during the coronavirus lockdown.

She said the doctor described the cancer “as a ticking bomb” that needs to be addressed as soon as possible because “once it goes off there isn’t any going back”.

Kimberley from Leyland, Lancashire, used to work as a full-time carer but said her life has changed completely after she was diagnosed with cancer three months ago.

She has created a GoFundMe page to raise funds she needs get treatment and a private consultation for her aggressive cancer.

Doctors have told her she has less than 50 per cent chance of living, she said.

The mum-of-one wrote on her fundraising page: “My tumour was/is aggressive and once spread will be completely incurable.

“Chemotherapy was put into place but we have been advised that this is not shrinking the cancer enough.

“All chemotherapy has now come to a halt.

“This has already caused me to loose all of my hair, my mobility is limited, nothing much is the same as it was before chemotherapy started.

“It took so much away from me.”

Doctors told Kimberley the next step for her is to undergo “complete reconstructive and disfigurement surgery”.

She said it will involve “a minimum of 12 hours on the table, with bones from my leg replacing bones in my face that will need to be removed”.

Kimberley said that because her cancer is tissue-related, it is not certain that doctors will be able to remove it all in one go, but it is the only hope she has at the moment.

If the surgery is successful, she is set to go under six further cycles of chemotherapy.

The young mum researched alternatives such as Photon Beam Therapy and Immunotherapy in America but these therapies have been ruled out.

Also, she said travelling to the US would mean having to raise too much money, which could take some time – and sadly, time is not on her side because she has been given only six months to live.

Kimberley is now hoping that with the funds raised she will be able to book a private consulation at Royal Marsden hospital in London.

Doctors have also told her to “make memories” with her seven-year-old child, but she said she does not want to “write a bucket list”.

Kimberley said: “I want to be around to watch my girl grow up, marry the man of my dreams & live a healthy life.”

Her surgery is scheduled for November 30 and will involve removing her cheek, along with the bones surrounding it.

Those bones will then be replaced by bone and tissue out of her leg, Kimberley added.

The woman said: “The surgeon has made it very clear to us that he cannot and will not give us even a 1% chance of this actually working but he says this is our best shot.”

At the time of writing, Kimberley has raised £17,600 which she hopes to spend for a private consultation in London with her partner Darren and daughter Maya by her side.

Kim said: “It’s something that just simply cannot be afforded by me or my family.

“I may be catching at straws trying to raise this money but I will try anything to save my life.”

You can donate to Kimberley’s fundraiser here

Jennifer Aniston needs no boyfriend to be ‘grateful’?