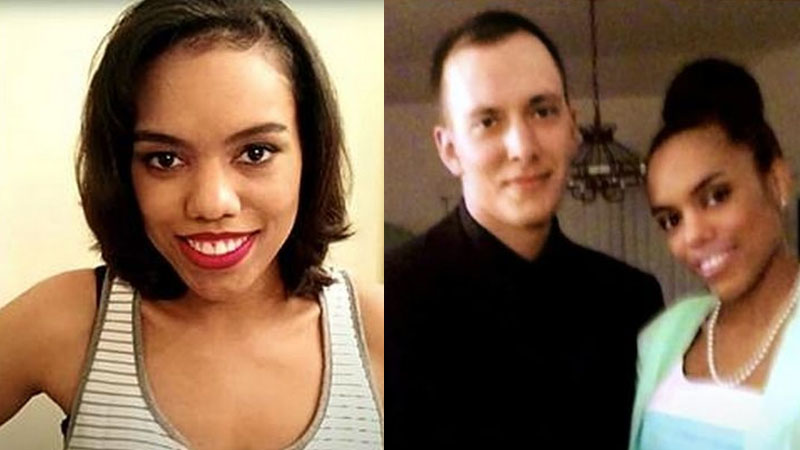 Life as a military wife is not always easy.

In 2014, Elizabeth Sullivan had two young daughters, aged four and two, and her US Navy husband Matthew was often deployed overseas, leaving Elizabeth on her own for long periods of time.

Cracks had started to appear in their marriage and it didn’t help that their relationship had been a whirlwind romance.

Elizabeth, 32, had met US Navy petty officer Matthew Sullivan in Virginia where she’d grown up. They’d married in 2010 and moved
to San Diego where Matthew was stationed at Liberty Station, but by 2012 their marriage was in trouble.

They were sleeping on separate floors in their three-storey navy housing and Elizabeth had apparently started talking to other men.

Tensions were high. On at least one occasion, Matthew had physically abused his wife. By 2014, things were so bad that she was talking to lawyers about a separation. She knew the custody talks would be difficult.

Friends were concerned about how unhappy Elizabeth seemed. She had self-harmed in the past and had stayed out all night sleeping at the park rather than going home. So when Elizabeth went missing in October 2014, they were worried for her safety and contacted the police.

Matthew admitted they were having marital problems and said he had been giving her “space” so hadn’t been concerned at first. He said that it wasn’t unusual for Elizabeth to stay out, which is why he hadn’t reported her missing and he’d assumed she’d left him.

But, as the days went by, even Matthew had to admit to the press that it was out of the ordinary to be gone more than one night.

Elizabeth was last seen on 13 October near her house and was wearing black trousers and a grey top. She sent a text message to a family member before her phone was seemingly switched off and her car was still parked at her house. As a mum to two young daughters, it was a concern that she hadn’t been in touch and her mobile hadn’t been used.

Loved ones pleaded for her safe return, including Elizabeth’s dad, Edward Ricks, who had travelled from Virginia to search for his daughter. “I feel like she’s in trouble,” he admitted.

After a few weeks, Matthew spoke to the press and said he wanted his kids to be reunited with their mum, but 10 months on there was no progress, despite Elizabeth’s case appearing on missing person programmes and across social media. The case ran cold.

Then, on 6 October 2016, days away from the second anniversary of Elizabeth’s disappearance, a member of the public reported a body floating in San Diego Bay, half a mile from where she lived.

The body was badly decomposed but it was identified as Elizabeth. She’d been stabbed to death.

When police went to inform Matthew, they discovered that the very same day Elizabeth had been found, he was leaving the military and moving from San Diego to the East Coast with a new girlfriend.

Coincidence? The police didn’t think so. He had always been a person of interest and the investigation was stepped up.

Police started to piece together what they believed might have happened to Elizabeth. They had a more thorough look through the Sullivans’ home and found Elizabeth’s blood soaked into the carpet and wooden floor in her bedroom.

There was also a knife hidden under insulation in the attic that had her blood on it. Detectives would learn that the day after Elizabeth vanished, Matthew had bought a carpet cleaner. Again, it was too much of a coincidence to ignore.

Investigators believed that Matthew had hidden Elizabeth’s body in the freezer in their garage for two years. But then he’d been forced to move the body when he was moving to a new house. He knew Elizabeth would be found, so Matthew had dumped her body in the bay hoping she would be washed out to sea.

On 31 January, 2018, Matthew was finally arrested in Delaware and was taken back to San Diego where he was charged with first-degree murder. He pleaded not guilty and was held on a $2.1 million bail.

In February 2020, the trial began. The prosecution described Matthew and Elizabeth’s relationship as a whirlwind romance that had quickly turned violent. They said that Elizabeth was having an affair and Matthew had found out. Elizabeth was also planning to leave him and take the children. She had already withdrawn $1,000 from their bank account.

“He had lots of motives. He had the means, he had the opportunity,” the prosecution said.

“The crime scene was in her bedroom. The murder weapon was in the attic over his bedroom.” The jury were shown the knife and told that Elizabeth had been stabbed at least five times.

Her upper jaw and nose were fractured. The blade of the knife had hit several ribs and had left a pool of blood that had soaked into the floor of her bedroom.

Matthew’s defence described a very different version of events. They said that Matthew had actually been trying to hold on to his wife as she turned towards a “self-destructive lifestyle” which included drug use and sleeping in the park.

They claimed that the blood found in the bedroom was from a self-harm wound Elizabeth had inflicted because she was under stress. And the knife was likely to be one she’d hidden so no one would find out what she was doing.

But the prosecution pointed out that there had been several domestic violence incidents in the months prior to Elizabeth’s death. They said Matthew had murdered his wife in their home and it was highly likely that their children were in the other room when he attacked her.

“He made her look like the person who had abandoned her family, when that was not the case and he knew it,” the prosecution said.

The agony of loss

In March this year, Matthew, now 36, faced sentencing. Elizabeth’s loved ones spoke of their pain since her death. They said she was loved by so many and the years since the murder had been agony.

A friend of Elizabeth’s said that no sentence would take the pain away and that sharing his grief wouldn’t make Matthew feel any differently about his guilt.

Matthew made a short statement saying that some defence witnesses hadn’t been able to testify and he believed if they had been able to, it would have turned the case in his favour.

“I firmly believe their testimony would have changed the verdict in this trial,” he said.

The prosecution chastised him for showing no remorse for what he’d done and for letting everyone believe for two years that Elizabeth had just walked out on her life.

The judge agreed it had been a cruel killing.

“The jury verdict and the evidence at trial made it clear that Matthew Sullivan brutally murdered his wife, methodically cleaned up the messy murder site and then hid the body for years,” he said.

“He almost got away with it, but his final attempt to hide the body at the bottom of the bay failed.”

Matthew Sullivan was sentenced to 16 years to life in prison. He had hidden his terrible act and, for a while, no one knew what he’d done.

But the truth surfaced along with her body from the waters of San Diego Bay and the law finally gave Elizabeth the voice she deserved.