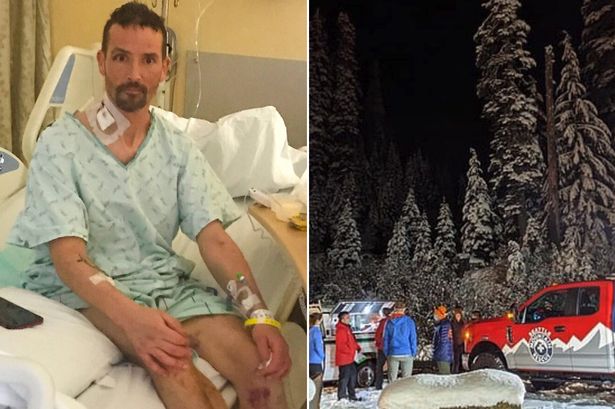 A hiker was brought back from the dead after collapsing on a mountain in the United States.

Michael Knapinski was dead for 45 minutes before being brought back to life in a ‘miraculous’ effort by medics.

The 45-year-old got intro trouble during a snowy hike with a friend on Mt Rainier, Washington, on November 7.

Mr Knapinski and his friends had taken separate paths just before the weather took a turn for the worse.

The last thing he remembered before passing out was taking ‘baby steps’ in white-out conditions, the hiker told the Seattle Times.

“I was pretty close to the end (of the trail). … Then it turned to whiteout conditions, and I couldn’t see anything,” he said.

The survivor said he had scrapes and bruises on his body, but didn’t know how he had become so dangerously stricken.

“I’m not sure what happened. I think I fell.”

He and his friend had planned to meet up at a different point of the trail, but the pal grew concerned when Mr Knapinski didn’t show.

When he didn’t return to the parking lot later, his friend reported him missing.

National Park rescue teams continued searching for him into the following day, in poor visibility and freezing conditions.

Helicopter search parties finally spotted him around a mile upstream from a glacier bridge over the Nisqually River.

It took the ground teams another hour to reach the unconscious hiker, and he was whisked to hospital.

But while in the emergency unit he died.

Dr Jenelle Badulak said he had gone into cardiac arrest, but medics believed they could save him.

She told the Times Mr Knapinski remained dead for about 45 minutes, while the Harborview Medical Center’s medics gave him CPR and hooked him up to an extracorporeal membrane oxygenation (ECMO) machine.

The state-of-the-art machine pumps blood from the heart and lungs out of the body, then removes carbon dioxide, and sends oxygen-filled blood back into the body.

They managed to revive him, and two days later he finally opened his eyes again.

Dr Saman Arbabi, the medical director of Harborview’s surgical intensive-care unit said:“He came back from the dead. … Maybe not medically quite correct, but his heart wasn’t beating for more than 45 minutes…It’s amazing.”

Mr Knapinski was incredibly grateful to the teams that saved his life.

The hiker said his near-death experience had fastened his resolve to make his volunteering at a local food bank and building houses for foster children his life’s work.

He thanked the Harborview staff, telling the Times: “(They) just didn’t give up on me. … They did one heck of a job at keeping me alive.

“I’ve got a million people to thank.”