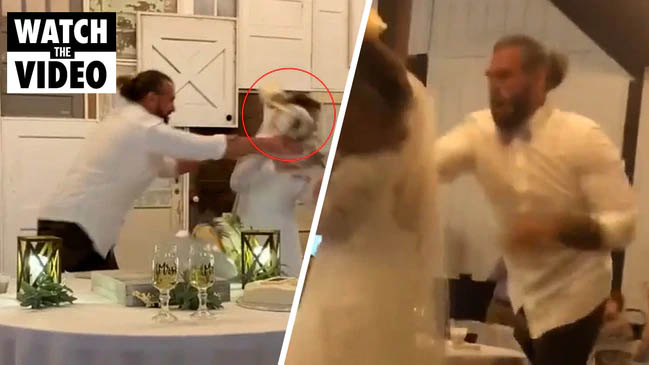 Footage of a bride having an entire wedding cake shoved in her face by her new husband has divided viewers online – with some branding him “aggressive”.

The bride was forced to defend her beau after abusive messages were sent about the video.

In the clip, uploaded on TikTok by user @kelsboyd3, a woman in a full-length wedding gown and a veil is cutting into a wedding cake and teasingly smears a bit of the cream on her partner’s face.

For an instant, he looks shocked and backs away.

Then he sneaks up behind her and throws the entire cake at her and into her face in front of stunned guests – who don’t appear to know what to make of it.

Obviously, the pretty wedding cake is completely destroyed in the carnage.

The video was watched more than 2.8 million times on the video-sharing app and many viewers sounded appalled by the groom’s actions, with some branding it a “red flag”.

“What a great guy. Good luck.”

“Very romantic and sweet and gentle of you.”

Thinking purely of the cake, another person blasted: “Probably cost $100s and nobody even got to enjoy it.

“Kind of disrespectful to whoever put time into making that for you.”

Defending the newlyweds, someone else commented: “Y’all so sensitive lmao not everyone’s relationship is the same.”

She said: “This is us and it was funny to everyone

“I’m sorry that you have a different sense of humour.”

Responding to another comment on the video, the bride insisted she wasn’t “embarrassed”.

Hitting back at critics further, @kelsboyd3 has updated their TikTok profile to read: “A CAKE never hurt anyone.”

The 5 Best Luxury Hotels For a Beach Wedding

World’s Most Breathtaking Highways in the World