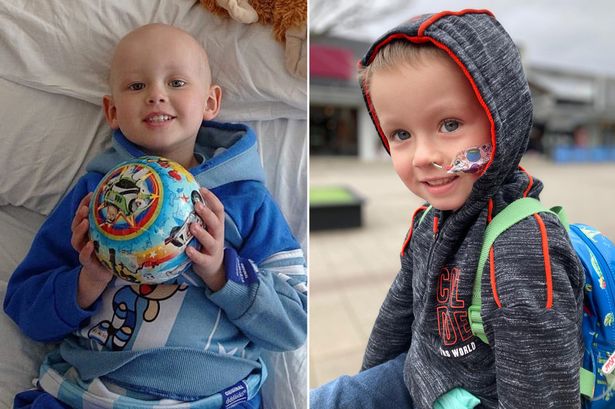 Parents of a four-year-old boy said they got the “best Christmas present ever” after the huge sum was raised by well-wishers.

Since then, the condition spread to his skull, eye sockets and bone marrow.

The cancer affects 100 children in the UK every year.

Since he was diagnosed, Oliver had chemotherapy, stem cell treatment and a bone marrow transplant.

Now, thanks to a crowdfunding campaign, he will travel to America next year for a pioneering new vaccine which aims to stop the cancer returning.

His mum Laura, 35, said: “The incredible support and donations not just from our friends and family but around the world has been overwhelming.

“We are so grateful to everyone who has helped.”

She added: “It’s been a really difficult year for us and back in January Oliver’s prognosis wasn’t good at all.

“But he has battled through everything and is doing well now, he’s fit and strong and even back at school.

“Due to that we can properly start thinking about going to America next year for further treatment, which is a huge and exciting step.

“It’s the best Christmas present ever.”

The family, including dad James, 33, and brother Alfie, three, say Oliver will be able to travel to the States when he finishes immunotherapy and is officially disease free.

Laura, from Ackworth, near Wakefield, West Yorks, said they hope to get the all clear in March.

Laura said: “It is a clinical trial so we don’t know what will happen.

“But 60% of people who recover from neuroblastoma end up relapsing, so we want to do everything we can to stop that happening to Oliver.”

She added: “We’re over the moon, it’s really overwhelming.

“It’s going to be an amazing Christmas for us with this on the horizon.

“He’s doing really, really well now. He’s fit and strong. We can see the light at the end.”