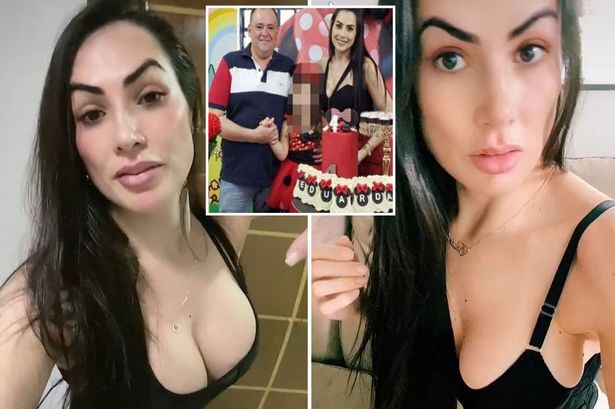 An influencer who liked to share saucy images online has died after reportedly being shot by her husband in front of their daughter during an argument over a TikTok video.

Her husband is believed to have then committed suicide at the family barbecue in the district of Nova Itamarati in the Brazilian municipality of Ponta Pora, which straddles the border with Paraguay, on January 24.

The lifeless bodies of Alejandro Antonio Aguilera Cantallupi, 41, and Eliane Ferreira Siolin, 35, were found on the back porch of the rural property where the barbecue took place.

The police seized a gun, a number of bullets and a spare magazine found close to the bodies.

It is reported that the couple’s six-year-old daughter witnessed the incident, and she was later taken in by relatives.

Local media also said the couple argued about one of the clips Eiane had uploaded to popular video-sharing app TikTok. However, this information has not yet been corroborated.

Eliane was Brazilian and it is not clear if Alejandro was a Brazilian or Paraguayan citizen.

Her TikTok page has over 58,000 followers, and the busty influencer used the platform to post regular short clips of herself, often in revealing outfits.

The police are investigating the case.

Violence against women is a serious problem in Brazil, with a 2015 study showing a woman is the victim of domestic abuse every seven minutes in the South American nation.

More than 70% of the country’s female population will suffer some kind of violence during their lifetime, while one in every four women will report being a victim of psychological or physical violence.

Last year a Brazilian personal trainer was stabbed to death in a row with her neighbours when she spotted them filming her, with witnesses saying the neighbour’s husband inflicted the fatal wounds.

The following month another Brazilian woman died after being shot in the face by a stranger at a market.

‘Trashy’ mother is blasted after giving her baby a manicure

Baby ripped out by ‘womb raider’, now 16, has ‘closure’ after mum’s killer executed