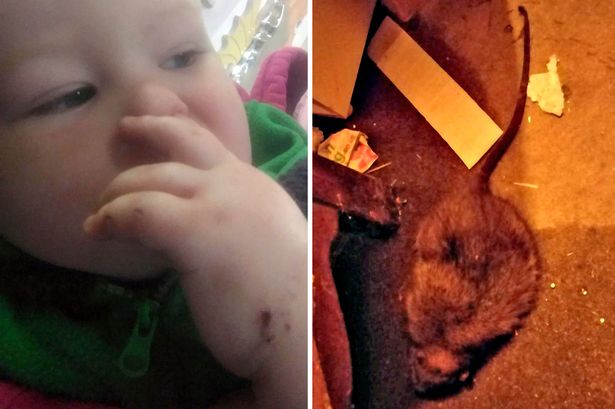 A horrified mum found a huge rat chewing her 18-month-old son’s hand as he slept – and says that a few nights before the attack she woke up when the rodent scuttled across her face.

Jane Hunter was woken by her son Rowan’s screams on the night of November 16 last year. She rushed into his bedroom at 4am to find the rat in his bed.

Jane, 34, chased the giant rodent away and rushed Rowan to hospital after finding his bedclothes soaked in blood and three nasty bites on his right hand.

The family, who live in a farmhouse in Out Rawcliffe, Lancashire, have previously spotted mice in their house – but never a rat as big as this one.

Mum Jane said she had spotted the fearless rat before – and even woke up two nights before the attack to find the rodent on her face – but wasn’t quick enough to catch it.

Jane, who breeds horses for a living, said: “It was honestly traumatic. Rowan is so young so he’s absolutely fine now whilst I’ve really struggled with it.”

“It was horrendous,” she added. “Rowan didn’t seem affected after about 20 minutes, but for days and days, I was an absolute wreck. I couldn’t sleep. I’d just sit there watching him all night.

“I’d seen the rat a few times and we’d been doing our best to catch it. It was huge and not at all scared of people – when you walked near it, the rat would run at you rather than away.

“Two nights before the attack, I woke up with it on my face! It was stood on my pillow with one foot on my forehead and I remember feeling the size of it before I jumped out of bed.

“On the night in question, Rowan woke up screaming and the bed was covered in blood. We searched for something sharp in the bed, but then realised it was from the rat we’d been seeing.

“His bed is next to ours, so I think when the rat climbed on me a couple of days before, it was trying to get to him.”

Young Rowan was rushed to A&E and treated with a course of antibiotics, but Jane has been left traumatised by the attack.

Jane said: “We’ve now got Buttons who sleeps in the bedroom with Rowan as I’ve developed real issues with letting him sleep alone.

“She sleeps in the bedroom every night and it just makes me feel a bit better as I literally didn’t sleep at all for two or three nights after Rowan got bit. I just sat up watching him all night.”

Thankfully, the rat is now dead after the family found its lair.

Jane added: “After the attack, we found out the rat was living inside a couch on the landing so we have now managed to capture it.

“We found lots of poo in the couch and two dead mice that it had obviously had as a snack.

“I just couldn’t believe that it had happened but after googling it, I’ve seen rats often go for fingers of little babies and elderly people as they can smell food on them.

“Buttons has been our saviour throughout this and now I can sleep again at least. I wasn’t particularly scared of rats before, but I am now!”