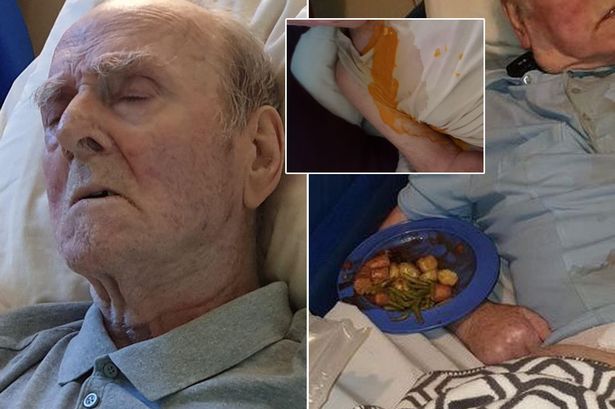 The family of an elderly care home resident who died after losing 8st in less than 18 months say they would find him “in a dirty bed, soiled with faeces and food, with no covers and no clothing on” when visiting.

Multiple concerns were raised about the standard of care he was receiving in the facility by his step-daughter Susan Kyle and her husband Stephen, Daily Record reports.

Alexander suffered a stroke and lost his sight and feeling down the right-hand side of his body and was taken into care in October 2018.

In complaints made to Four Seasons Health Care, who ran the facility until May 2020 while Mr Whigham was a resident, Susan described how her step-father dramatically lost weight going from 18st when he was first admitted in October 2018, to 10st in February 2020, just one month before his death.

The home was put under review by the Care Inspectorate and West Lothian Council in October 2019.

Private firm Livingston Care Home Ltd took over the facility in May 2020.

Susan told the Daily Record: “He lost about 8st in a year-and-a-half. We were so worried that we started making sure there was someone visiting him everyday.

“To see someone go from their normal weight to skin and bones in front of our eyes was horrific.”

Susan said her step-dad was regularly left alone with a meal despite being unable to move and having no vision on his right-hand side.

As a result, he regularly went without meals or had to eat food which was old or had gone cold.

Susan said: “Half the time the food was not properly presented to him. If it was left on the right-hand side of the bed he couldn’t see it. No one was coming through to feed him.”

Susan added: “There were staff there trying to do their job, but it was the way things were managed.”

She said: “We found out during a meeting that he was being over prescribed medication which hadn’t been adjusted. He was really, really drowsy.”

In February 2019 Mr Whigham was put on weekly weigh-ins as a result of this weight loss.

They also say Mr Whigham’s room was unclean and untidy and that family members often spent their visits trying to wash him.

Susan says some standards began to improve after her correspondence with the Care Inspectorate in February this year, however it was too late for Mr Whigham who died on March 9.

A spokesperson for Four Seasons Health Care said: “We send our condolences to the family of Mr Whigham following his passing earlier this year.

“While we no longer operate Livingston care home, we take all complaints very seriously and had sought to address these at the time through a number of actions including measures to assist Mr Whigham to eat independently, as he preferred, and multiple reviews of his medication.

“The care and safety of our residents is our number one priority.”

A spokesperson for the West Lothian Health and Social Care Partnership said: “Livingston Nursing Home was subject to inspection by the Care Inspectorate in October 2019 and improvement actions were identified.

“The HSCP have supported the work of the care home to achieve the required improvements.”

A spokesperson for the Care Inspectorate said: “Everyone has the right to good quality care which meets their needs and respects their rights.

“It is clear that in this instance the care experienced by this individual fell far short of the standard they had a right to expect and our thoughts are with those affected by this.

“The service was in the process of transferring to a new care provider at the time these concerns were raised and for this reason we were not able to progress a full investigation of this complaint.

“We viewed the transfer to a new care provider as a positive step towards improving the care experienced by all residents.

“The information given to us was used to inform our wider scrutiny and improvement intervention with this care service.

“We had served them with a formal improvement notice which detailed areas of care which needed to improve, and liaised closely with the local health and social care partnership to ensure any additional support the care service needed was put in place.”