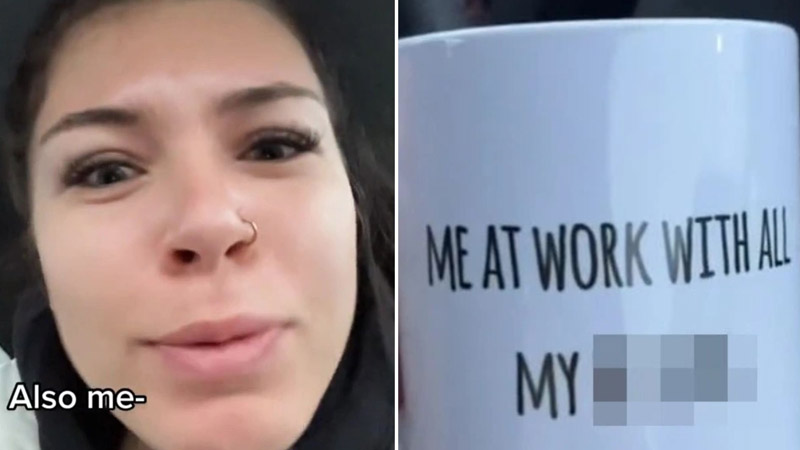 She said she’d never “kick off” over a Secret Santa present.

But that was before she saw the gift her boyfriend received from a lady he works with.

Sophie turned to TikTok to express her feelings over the gift, beginning with a selfie with the caption, “No, I’m not insane at all. “I wouldn’t kick off over a Secret Santa.”

“Also me,” she continued before starting into her foul-mouthed diatribe against the mug.

“Are you f**king taking the p*ss, right?” Sophie started.

“Look what that f**king w**re gave Billy for Christmas.”

The words “Me at work with all my b**ches” were printed on the front of the mug.

Then there was a lot of f**king s**nks on the back of the cup.

“I don’t want to hear whether I’m overreacting,” he said before adding the caption.

However, almost everyone who commented on the video thought that Sophie’s reaction was completely justified.

“No, but seriously, why would you purchase it for someone who has a girlfriend?” one user remarked. “Would definitely irritate me.”

“I hope she notices this. Someone would have to limit my level of rudeness “another was added.

Someone person said, “Nah, this would push me over the brink.”

“Ngl I appreciate ur reply girl,” said another.

“What do you mean? Who would pay for that? “Someone else inquired.

“Heads would be ripped off hahaha hahaha,” another person said.

Another person acknowledged “trying to make sense” of the present by asking, “Is he the only man that works there?”

“I’d show up at his workplace,” wrote another.