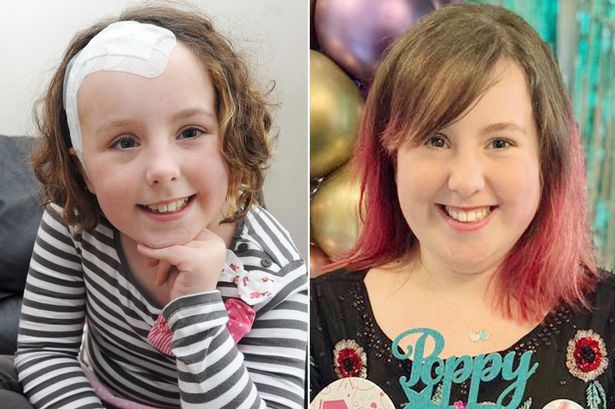 A girl who was told she only had a “50/50” survival chance when she was diagnosed with brain tumour has miraculously made it to adulthood.

Poppy Guilder, from Tamworth, Staffordshire, was diagnosed when she was just 14 months old in March 2004.

She went in for an eight-hour brain surgery just 12 days later, when her heartbroken parents were told “there was only a 50/50 chance we would get her back”.

But doctors also told them that if Poppy managed to pull through to adulthood there could be a chance she would stabilise, Birmingham Live reports.

Five brain surgeries, two years of chemotherapy and six weeks of radiotherapy on, Poppy’s family said they are thrilled to have witnessed her turn 18 on January 9.

“It has been a rollercoaster for me, my family and everyone who has supported me over the years but I wouldn’t be here celebrating my birthday if it wasn’t for all the amazing people and my mom and dad who have been there every step of the way,” Poppy said.

“Thank you to all of the people who have sent me amazing presents, cards, video, messages and posts. Thank you all so much.”

Lisa admits at one point reaching her second birthday seemed such a huge achievement but amazingly the family are now planning a joint celebration, when guidelines allow, as Brian also turned 50.

She beamed: “We are so lucky to see her becoming an adult. At one point, reaching her second birthday seemed such a huge achievement. She’s amazing.

“Poppy had such a wonderful birthday, I don’t even know where to begin! We cried so many times and laughed lots. Her day was filled with doorstep visits, wonderful gifts, beautiful cards, heartfelt words, video messages, FaceTime calls, delicious cake, fabulous balloons, yummy food, little sisters’ pampering and family fun!

“Knowing how many lives our amazing Poppy has touched at the the tender age of 18 makes us even prouder than we already were, if that is even possible.

“Bri was 50 last April and we’ve still not celebrated it. Poppy wants a big joint party when it is possible. I really hope we get to do that – at least we are all safe and well though.”

Lisa recalls: “When Poppy was diagnosed with her brain tumour at 14-months-old in March 2004, we were told it was a childhood brain tumour and that if they could get her to adulthood things would hopefully stabilise.

“The aim was to get her there with as little damage as possible. It seemed like a whole lifetime away and every birthday was a huge milestone. Well…she did it! Poppy is officially an adult.

“We know her journey isn’t miraculously over as she deals with the long term effects of having five brain surgeries, two years of chemotherapy and six weeks of radiotherapy and some tumour remains and continues to be a pest.

“However, this really is a monumental milestone and we are beyond grateful to Prof Peet, the neurosurgeons (Desi Rodriguez, Mr Sigoros, Mr Solanki and Mr Walsh), every doctor, nurse or specialist at Birmingham Children’s Hospital who have all ensured Poppy has received the best treatment available with the most wonderful love and care too.

“Poppy will now move to the QE Hospital in Birmingham, where she had radiotherapy in 2008, which is another amazing hospital.

“But how can we ever thank the BCH team for saving her life so many times and for getting her to this truly remarkable milestone?

“There really are no words besides THANK YOU. We will continue to fundraise to help you save others like our beautiful girl.”