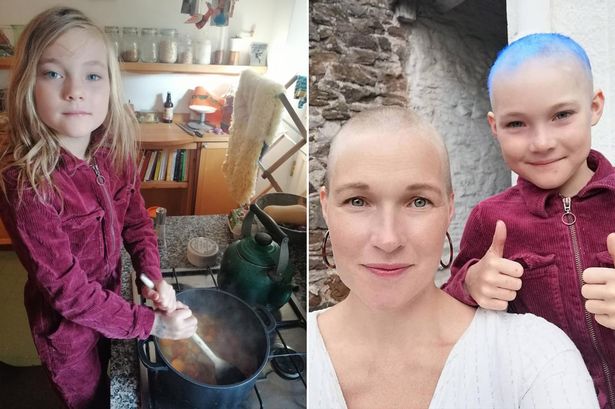 Nine-year-old Tabitha believes the stress of lockdown and schools closing in March led to her alopecia, she tells Lizzie Catt.

As children returned to their classrooms after the summer, many were feeling apprehensive.

Tabitha Clark Kerry, nine, was among them – she was about to stand up in class and explain why, since her schoolmates last saw her in March, she’d lost her hair.

Tabitha had a tough few weeks in lockdown, not that you’d know it to speak to her now.

Bright and hilarious, she’s full of stories about climbing trees, sneaking messages to her best friend, her love of foxes and discovering “a big passion for breakdancing”.

She’s excited to show off a scar on her cheek that dimples when she smiles, the legacy of a nasty fall from her bike.

It happened two days after she shaved off her hair due to alopecia areata, a condition that causes hair loss.

It wasn’t long after lockdown began that Tabitha’s mum, Becca Gill, noticed a patch of her daughter’s hair had fallen out.

Initially not too obvious, the thinning accelerated rapidly in June.

“It was scary,” says Tabitha, from Totnes in South Devon.

“Then we realised I had alopecia so I was very, very mortified and very upset, I would cry a lot.

“When the sides of my hair were missing, I looked absolutely awful, like I’d had something really bad done to me.”

When, by the end of the month, 70per cent of her hair had fallen out, Tabitha decided she “wanted it gone”, so she and Becca shaved their heads together.

They raised £485 for Alopecia UK, with Becca’s hair going to The Little Princess Trust to make wigs for children undergoing chemotherapy.

Tabitha remembers: “When we shaved it off, I looked in the mirror and screamed. My mum did the same when we shaved hers.”

Despite the shock, Becca says it was a cathartic moment.

“When the hair loss started, it was incredibly disturbing. I think us both shaving our heads was a way of processing and taking control of what was happening.”

Having decided she wanted to look ‘punk’, mother and daughter walked into the village in search of blue hair dye, exposing themselves for the first time to the feeling of rain on bald heads and curious looks.

Tabitha strongly suspects that her alopecia was caused by the unexpected stress of school closing and home schooling.

Becca, too, says that while dermatologists and blood tests could tell them nothing and they’ll never know the reason for Tabitha’s alopecia, the timing does seem linked to lockdown.

Frustratingly, nobody knows for sure what causes the condition, which affects one or two people in every thousand.

Amy Johnson from Alopecia UK explains that alopecia areata – one of several forms of alopecia and the most common in children – is an autoimmune ­condition.

But there’s no conclusive evidence about triggers and currently no cure, though they’re hopeful for better treatments in future.

“Some people can link it to mental or physical stresses, others report their alopecia areata began when their lives were ticking along just fine,” she says.

“Some see regrowth after reducing stress, others don’t, while regrowth can happen in months, years, decades and for some, it doesn’t happen at all.

“It’s important to remember that while stress may be a trigger – and we just don’t know – hair loss can be a difficult thing to go through and it’s OK to feel stressed about it.

“Talking to people in the same situation can be hugely helpful. Alopecia UK is investing in research and provides support for people going through hair loss.”

Five months on, Tabitha’s hair has started regrowing, though the bald look suits her well.

She’s never wanted to wear a wig and says she doesn’t mind if her hair doesn’t grow back.

She feels more settled now her alopecia and “dreadful” scar are old news at school.

“I told my class what had happened – there were a lot of questions and I was a bit scared.

“But I’m getting more confident. I’m used to people asking me questions now.”

Becca adds: “It’s still hard. Someone the other day said ‘Oh no, does your little boy have cancer?’ in front of her.

“She is so strong and takes it in her stride, mostly. I’m happy that she is holding it all together so bravely.”

As for the second lockdown, Tabitha suggests the Government introduces ananimal theme to make it all less stressful.

“If everyone wore a fox mask when they went out, it’d be much more fun!”

7 Things You can Steal from Your Boyfriend’s Wardrobe