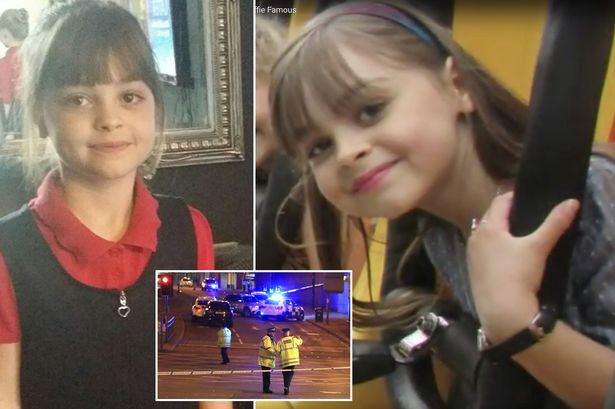 The youngest victim of the Manchester Arena attack might have survived if she had received better first aid, it has been reported.

Saffie-Rose Roussos, 8, was one of the victims of suicide bomber Salman Abedi, 22, who detonated a shrapnel-packed backpack bomb.

A total of 22 people died and hundreds were injured in the attack and in August, Abedi’s younger brother Hashem, now 23, was jailed for at least 55 years for helping to plan the atrocity.

According to the BBC a report commissioned by Saffie-Rose’s family has revealed that no one used simple tourniquets or splints to apply pressure and reduce her bleeding.

For the last three years, Saffie’s parents have reportedly believed that she was killed instantly in the explosion and said they drew comfort from thinking that she had not suffered.

Now it is said they have been told that their daughter lived for over an hour, and that opportunities were missed to help her.

It was also reported that the family learned that Saffie asked a paramedic, “am I going to die?” as she was being taken to hospital by ambulance.

Saffie’s father, Andrew Roussos, told the BBC: “She could have been saved.

The BBC said the report found that, moments after the blast, Saffie lifted her head and tried to push herself up with her arms. She is said to have been given water, and to have asked for her mum.

Several people tried to help her but though she was bleeding heavily from serious leg injuries, nobody used a tourniquet, or splint to apply pressure and reduce the bleeding, it is reported.

The report is said to have commended the actions of the people who tried to get her to hospital as quickly as possible but found that the ambulance did not have all the necessary equipment on board.

She is said to have been agitated, and pulling at her oxygen mask and was able to speak and asked whether she was going to die.

Mr Roussos said: “Medically trained people were with her. And she was asking for help. She knew what was happening. And she bled to death.

“Eight year olds don’t ask those questions. Doesn’t matter how hurt they are, they want their mum.

“They want to be treated, they want to be out of pain. Not to be in the sound mind to ask the paramedic whether she’s going to die.”

The report was said to have found that the ambulance crew did not use tourniquets or splints on Saffie’s injuries, and neither did the medical team at hospital, when Saffie arrived at A&E.

It also said that it was unclear why the trauma team at the hospital didn’t begin a surgical procedure called a “thoracotomy” to stop the bleeding.

Saffie was pronounced dead at the hospital at 11.40pm, more than an hour after the attack and the report said that due to the bleeding being left unchecked, it resulted in a level of blood loss to the point at which the heart was no longer able to beat, and it could not be restarted.

The arena inquiry is investigating the circumstances that led to the bombing, the emergency services response and whether it could have been prevented.

It is due to resume on Monday after being paused because of the coronavirus pandemic.