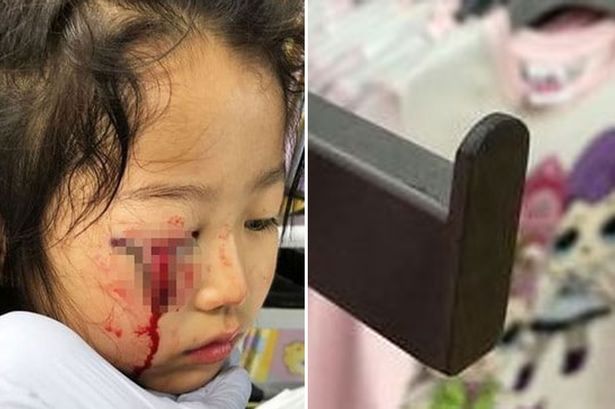 Two major supermarket chains have announced they are making safety changes after a little girl nearly lost her sight when her eyelid was torn off on a store’s clothing hook.

Celia Chan, 6, suffered the horrific injury after she collided with a hanging while shopping with her family at a branch of Kmart in Sydney, Australia.

The little schoolgirl was left with blood pouring down her face from her eye socket.

News.com.au reported that the hook, which was pointing upwards, pierced her eye as she lost her balance and fell onto it.

She was forced to have surgery in order to repair her eye as her devastated mum, Jill Haung, said it will never look the same.

Ms Huang said: “It was so sudden. It all happened in less than a second. Cecilia wasn’t running around or doing anything silly. No matter how careful her grandma was, she could not have prevented it.”

Celia had a four-hour operation on her socket and luckily, her eyeball escaped injury.

Her muscles, nerves and socket were severely damaged and her eyelid was torn off, according to 9 News.

Celia’s ordeal, which took place in January, has reportedly sparked a rethink from Target and Kmart about store safety.

The horrific incident was the latest in a string of gruesome injuries, with a five-year-old boy colliding with a hook only months before.

And in 2018 a toddler was left with blood pouring from their nose and arm after the prong went into her eyelid.

A Kmart spokesman told Nine News that plastic covers will be put on apparel arm hooks from next year.

“Trials have shown these to significantly reduce the risk of injury or laceration if someone accidentally hits the apparel arm,” the spokesman said.

And according to reports, Target will be following suit. Both companies are owned by conglomerate Wesfarmers.

A total of 1.2 million caps will be put on every hook in Kmart while another 900,000 will be installed in Targets.