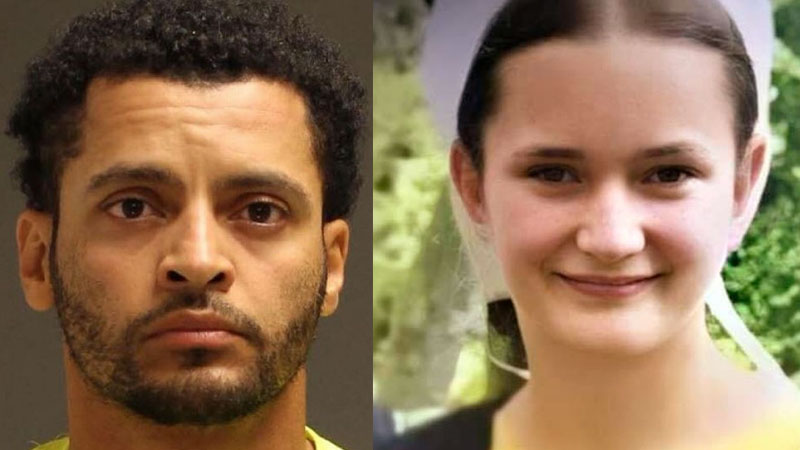 A teenage Amish girl was strangled and stabbed to death before her body was wrapped up and dumped in a shallow grave.

The shocking details of 18-year-old Linda Stoltzfoos’ death were revealed as an autopsy found the cause was asphyxia and strangulation, along with suffocation.

The tragic girl was found wrapped in tarpaulin and buried in a three-foot deep grave in the town of Gap in the US state of Pennsylvania.

Lancaster County coroner Dr Stephen Diamontoni said a stab wound to her neck was a contributing factor in her death.

Linda had last been seen walking home from church on June 21 last year.

Justo Smoker, 35, was charged with homicide in December and is currently awaiting trial. Smoker had been initially arrested in August and he also faces charges of kidnapping and false imprisonment.

He has pleaded not guilty to the charges.

Authorities have not said what led them to the grave or if Smoker had revealed the location as part of a deal with prosecutors.

Her remains were finally discovered on Wednesday.

Detectives believe Smoker killed the teenager within hours of kidnapping her and buried her in a location where her stocking and bra were found. They think he moved the body several days later to the grave discovered earlier this week.

Linda’s uncle Mervin Fisher said the family had been hoping she would be found alive, but had been preparing for the worst.

He said: “The not knowing is a long, dark tunnel without an end. And when you find the remains, you have the end in sight.

“It brings closure, and when there’s closure, the healing process can continue.”

A county judge ruled last month there is enough evidence to bring a homicide trial against Smoker.

Local Debbie Matteoda said: “For the family I feel terrible because they keep all this hope all this time that maybe she will show up, but then again it’s a closure.”

Another, Krista Hanna, said: “It’s sad. I hope that the family feels peace a little bit and the search is over and they know now what happened.”

Linda’s dad reported his daughter missing after she failed to return home from a youth group she had been set to attend.

Investigators say she never made it to the group.

The car was seen parked in rural location on June 23, two days after Linda was last seen, authorities found items of her clothing buried in a wooded area, according to prosecutors.

A huge number of volunteers turned out to look for the missing teen.