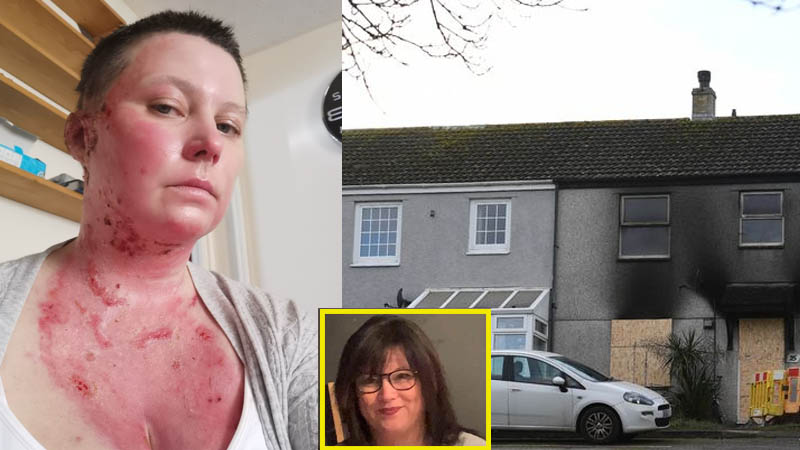 A mum accidentally set herself on fire in a freak accident that killed the family cat and destroyed all their possessions.

Jo Blatchford, 45, caused an inferno when she carried a tea light into a freshly-sprayed cloud of air freshener at her Torpoint home.

She escaped the flames along with teenage daughter Grace and their two dogs, but tragically cat Mitzy didn’t make it out, Plymouth Live reports.

Jo’s left hand, one ear and her neck were severely burnt and she spent four days sedated in hospital, finally released on Christmas Day after two skin graft operations.

She has spoken out now to warn others of the dangers of taking candles near aerosol spray – but also to thank the Torpoint community for raising £8,000 to replace their possessions.

The dental nurse added: “It was just a stupid thing to do, a ridiculous thing to do. We all know that fire and aerosols do not go fabulously together. Unfortunately, it did not go very well for me.”

Jo said that she was spraying aerosol air freshener in her front room in the three-bedroom house that Sunday morning. She lit a tea light and walked across the room through the cloud of gas – which then ignited.

Jo said: “My hair caught light and I was wearing hair extensions and then the left side of my jumper caught fire. I dropped on the floor and managed to put it out but the fire spread so quickly.

“There was a printer and a lot of paper in the area, as well as Grace’s school books.

“One of my children asked me what it felt like and I cannot say. I cannot tell you whether it was painful or whether it felt like burning but I guess it must have been painful because I was screaming.”

Grace, 15, rushed downstairs and helped her mother and the two dogs out of the house before calling the fire brigade. Six fire crews from across Cornwall and Devon attended and smoke could be seen from Plymouth.

Sadly Mitzy, aged 14, was found dead at the bottom of the stairs.

Both mother and daughter were taken to Derriford Hospital, with Grace checked over for shock and smoke inhalation.

Jo was under sedation in intensive care for four days and suffered severe burns to her hand, ear, neck, chest and leg.

She said: “I just remember waking up, it was the scariest experience of my whole life. I knew where I was and why I was there, but I would not wish that on anyone, to be honest.”

Jo said Grace has been her “rock” by looking after her since she came home, and also praised all the staff at Derriford Hospital who looked after her.

A GoFundMe appeal was launched and has raised £8,000 for the family.

Jo added: “I have just been overwhelmed by the support of the community. People have been donating money and they do not even know us.”

They’ve used the money to replace lost clothing, Grace replaced a small games console and some will go to Jo’s ex-husband who owns the house, but they’re looking to give the rest to a local charity.

One thing Jo did manage to save was a pendant containing her sister’s ashes. Lindsay Hawking died from cancer at the age of 37.

She said: “It was one piece of jewellery that I do not normally wear which I was wearing that day. But we did lose a teddy bear which was made from my sister’s clothes.

“We are also obviously devastated about the cat.”

By chance, Jo and Grace were due to move into Lindsay and her former partner’s home in Woolwell on January 1 so they could be closer to their parents and grandparents.

They have been able to make the move rather than having to return to the burnt-out house.

How to Deep Condition Your Hair?

Bloodied policewoman feared she would die when girl, 14, pointed gun at her head