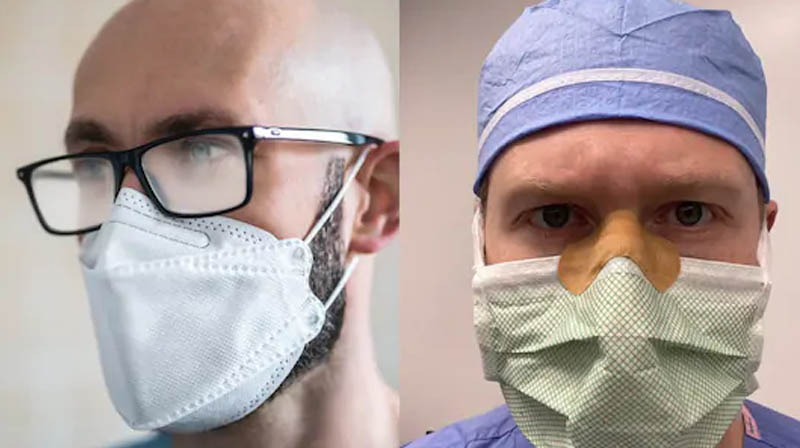 Do you wear glasses? Then you probably know how annoying it is to have your glasses fog up when you wear a face mask. Well, one doctor is here with a hack, and it’s kind of genius.

Daniel M. Heiferman, MD, a neurosurgery fellow at Semmes Murphey Neurologic & Spine Institute in Memphis, sent out this tweet late last week: “If you’re having a hard time with glasses fogging or keeping your mask up over your nose, a simple [Band-Aid] does wonders. Learned it in the OR. Feel free to share, it may save lives!”

What does the Band-Aid do? It acts like tape, so your mask seals up to your skin, preventing your breath from escaping upward and causing your lenses to fog.

If you’re having a hard time with glasses fogging or keeping your mask up over your nose, a simple bandaid does wonders. Learned it in the OR.

Feel free to share, it may save lives! pic.twitter.com/RBG8JGUzFS

He also chimed in a few days after his original tweet to answer questions from people, including the very specific recommendation that you put the cotton part of the Band-Aid on the bridge of your nose, with half of it on the mask and half on your face. “With the cotton on the bridge, I found my nose didn’t get irritated after many days of use like other tapes would,” he wrote.

Dr. Heiferman tells Health that he’s been using this hack “for a long time—many years at this point.” While he doesn’t wear glasses, he does wear surgical loupes (i.e. specialized magnifying glasses) in the operating room. “They get fogged up just like glasses,” he explains.

That’s where the adhesive bandage comes into play. Dr. Heiferman says he tried to use regular tape on his mask to create a tighter seal and prevent his glasses from fogging, but “it was very irritating to my nose.” Instead, he says, “a regular Band-Aid with a bit of cotton worked much better for me, and I’ve been doing it ever since.” It makes sense in theory, but does this actually work? We asked other health professionals for their thoughts.

Randy McLaughlin, OD, who is in the division of optometry in the department of ophthalmology at The Ohio State University Wexner Medical Center, tells Health that this is “absolutely an acceptable way to prevent fogging.” In fact, he says it may even help prevent eye issues.

“I’ve seen an increase in the number of eyelid complications, whether it’s inflammation of the eyelids or styes, due to fogging,” McLaughlin says. (If you struggle with this, he recommends holding warm compresses against your eyes or washing your eyelids with Johnson & Johnson baby shampoo.)

Richard Watkins, MD, an infectious disease physician in Akron, Ohio, and a professor of medicine at the Northeast Ohio Medical University, notes that he, too, struggles with glasses fog. His verdict? The hack might work, but this is probably not a good permanent solution, in his opinion. “It’s likely to irritate the skin on the nose over the long-term, unfortunately,” he tells Health.

Aline M. Holmes, RN, a clinical associate professor at the Rutgers University School of Nursing, tells Health that adhesive is ultimately what this trick is all about, and a Band-Aid isn’t necessary. “You can use any kind of tape, so long as you’re not allergic to it,” she says. “Or some folks pull the mask up higher on the nose and set their glasses on top to seal the gap.”

As for the irritation concerns, Dr. Heiferman says that he hasn’t had any issues. “I do this all the time and I wear it for the entire day,” he adds.

Dr. Heiferman says all the attention to his tweet is “very surprising and unexpected” but he’s “so happy that it’s getting people to think about wearing their mask—and wearing it properly.”

PHOTO: Snake eel bursts midair through stomach of heron that swallowed it

Child bride, 13, forced to marry 48-year-old man and care for kids same age as her

Mutant COVID-19 strain may wipe out these uncontacted Amazon tribes