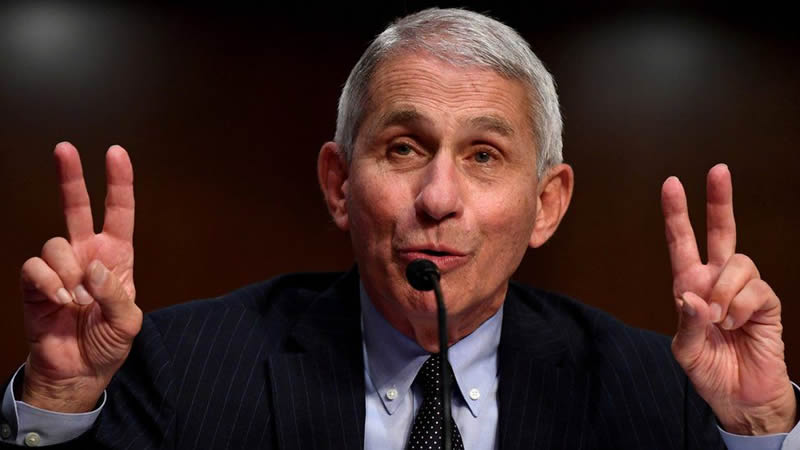 Dr. Anthony Fauci is apparently not riding off into the sunset. He still remains the face of the COVID-19 response, despite misleading the American public on a number of occasions about the now-retreating pandemic.

On Tuesday, the doctrinaire doctor who once brashly declared that he is “science” (therefore, criticizing his judgment is off-limits), suddenly proclaimed that a so-called ‘delta variant’ is the “greatest threat” to the nation’s efforts to eliminate the viral scourge.

If Fauci’s track record is any indicator, Americans should ignore the hysteria-addicted doctor. Because, unfortunately, Dr. Fauci has abused the public trust and substituted alarmism for reliable information, which has done much to sow confusion and undermine belief in the medical establishment.

Fauci essentially admitted to misleading the public, infamously, when he said in March 2020 on “60 Minutes” that people do not need to wear masks.

“There’s no reason to be walking around with a mask,” he said, in part because “it could lead to a shortage of masks for the people who really need it.”

As Fauci would later admit in a podcast interview, one of the ‘biggest regrets’ about his messaging during the pandemic was that his advice about masks was flawed.

“According to a timeline published by Forbes, when the virus first reached the U.S. in Mar. 2020, Fauci told the public, ‘there’s no reason to be walking around with a mask’,” Best Life noted.

“He suggested that masks should be reserved for frontline healthcare workers and could cause ‘unintended consequences’ if people touched their faces while adjusting them. By the end of that month, Fauci announced that he was engaged in a ‘very active discussion’ about whether to reverse that guidance. Not long after, in Apr. 3, 2020 interview, he urged viewers to ‘wear some sort of facial covering’ when out in public.”

Internal emails obtained by Buzzfeed show that Dr. Fauci firmly believed that commonplace masks are not capable of preventing coronavirus transmission. The NIAID director had sent this email in mid-February 2020.

“The typical mask you buy in the drug store is not really effective in keeping out virus, which is small enough to pass through the material,” Fauci said to a former Obama official.

“It might, however, provide some slight benefit in keep[ing] out gross droplets if someone coughs or sneezes on you. I do not recommend that you wear a mask, particularly since you are going to a very low risk location.”

It wasn’t a one-off, the New York Post points out.

“On Feb. 22, Fauci signed off on responses drafted by a NIAID spokesperson to 12 interview questions from a Greek newspaper. The last question read: “’Which are the protective measures anyone should take against the new virus? Do masks work?’”

“The vast majority of people outside of China do not need to wear a mask,” the Fauci-approved response read. “A mask is more appropriate for someone who is infected than for people trying to protect against infection.”

This conflicts with the messaging Fauci gave to Norah O’Donnell in July 2020 about the public advice he earlier gave not to wear a mask.

“I don’t regret anything I said then because in the context of the time in which I said it, it was correct. We were told in our task force meetings that we have a serious problem with the lack of PPEs and masks for the health providers who are putting themselves in harm’s way every day to take care of sick people,” Fauci told O’Donnell.

“When it became clear that we could get the infection could be spread by asymptomatic carriers who don’t know they’re infected, that made it very clear that we had to strongly recommend masks,” he said.

The problem is that he wasn’t lying about the fundamental truth that face coverings are not designed to prevent viral transmission. Fauci was right the first time. What changed? He received an email from a Chinese official eight days after the infamous ’60 Minutes’ interview in March 2020.

“Eight days after the interview aired, Fauci received an email from a man named Michael Liu with the subject line: ‘Great advice from Chinese expert’,” the Post reported.

“The expert Liu cited was Dr. Wenhong Zhang, the head of the infectious disease unit at Huashan Hospital in Shanghai. The email did not mention that Zhang is a Communist Party official who first gained media fame in China when he announced in January 2020 that he would send doctors and nurses who were Party members to front-line hospitals.”

“Thank you for your note,” Fauci replied. “We indeed have learned much from our Chinese colleagues. I appreciate your bringing these issues to our attention.” Then he signed the message: “Tony.”

Dr. Fauci’s ties to Communist China throughout the pandemic are demonstrably problematic. Through the now-discredited EcoHealth Alliance, the NIH funneled $600,000 in funding to the Wuhan Institute for Virology, which is now strongly suspected as being the origin of the novel coronavirus strain.

What were Fauci’s motivations for changing his mask messaging so dramatically and his adamant support for mask mandates? As was later shown by data in various states that eliminated mask mandates, such as Texas and Florida, the policy was statistically insignificant in “slowing the spread.”

The Wall Street Journal has now published an editorial that takes Fauci to task over his disastrous mask messaging. It underscores what many have been clamoring all along and may be a harbinger that public understanding is eventually catching up to the actual “science.”

“[W]hat a colossal disaster for public understanding masks have been,” the Journal article remarked about Fauci’s botched messaging.

“Until November, the official advice was the same that Dr. Fauci gave in a now infamous early email to a colleague—a store-bought mask may somewhat reduce your chance of spreading the disease if you happen to be infected,” the author Holman Jenkins wrote.

“It will do little to prevent you from catching it if you’re breathing around someone who is exhaling the Covid virus.”

“Only in the fall did the U.S. government start claiming masks might protect the uninfected too,” he continued.

“This appears to have been largely disinformation designed to get more unwitting carriers to wear masks. Even today, the CDC on its website stresses only one claim: ‘Masks are a simple barrier to help prevent your respiratory droplets from reaching others’.”

The research cited by Jenkins also raises a point that many might find counter-intuitive: Masks and face coverings may have been a net negative for public health.

“Under rigorous study, it may even be that masks were a net minus if they gave a larger-than-expected fillip to personal risk-taking,” Jenkins writes.

“When all the memos and emails finally surface, we may find local officials pushed masks mainly as a way to restart the economic engine at the risk of somewhat greater spread. The CDC’s most emphatic advice remains: ‘A mask is NOT a substitute for social distancing’.”

The masks were thus symbolic of a true scourge in America: The public’s craving for symbolic virtue-signaling in the absence of a strong assessment of the actual risks.

This was a failure of the medical establishment, which overhyped the COVID-19 risks to imply that young healthy people stood a roughly equal risk from the virus as the sickly and the elderly. This was never the case and the CDC’s data can be extrapolated to show that relatively young, healthy Americans have a 99.9985% survival rate.

A recent study in pre-publication phase provides further documentation of what astute observers of the COVID-19 pandemic already know: Mask mandates did not slow the spread of the coronavirus in the United States.

“Contrary to our hypothesis, early mandates were not associated with lower minimum case growth,” the authors found.

“Maximum case growth was the same among states with early, late, and no mandates. This indicates that mask mandates were not predictive of slower COVID-19 spread when community transmission rates were low or high.”

The bottom-line conclusion for the authors: “Mask mandates and use are not associated with slower state-level COVID-19 spread during COVID-19 growth surges.”

As reported earlier: “Mask mandates do not appear have any statistically significant effect on COVID-related case rates or death rates. Whether or not masks themselves have any marginal effect is a separate matter. A recent CDC study showed they have 0.9%-1.9% effect on case rates if used for 100 days.”

Mask mandates were the reason restaurants were shuttered. ports venues limited or closed to the public. Children made to endure long hours with no smiling faces or ability to breathe freely. Millions forced into unemployment. The American Dream put on “pause.” Life put on hold.

Shame on the people who fell for this scientifically indefensible scam. And shame on Dr. Fauci.