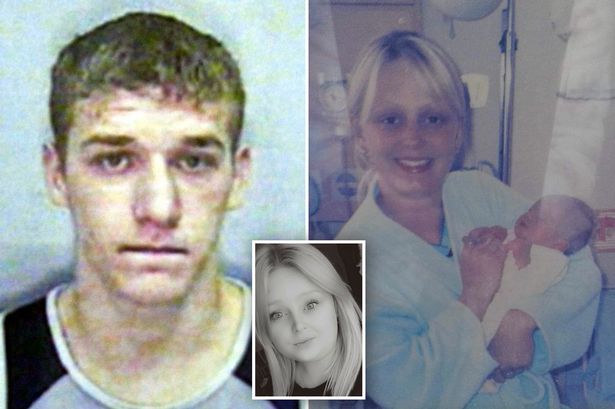 The daughter of a woman who was strangled by an obsessive ex has spoken out about how she felt “sick” upon learning of his affair with a prison officer whilst behind bars.

Demi L’Homme, 23, was only a toddler when her mother Louise L’Homme was strangled to death in their home in Tylorstown, Rhondda by crazed ex-boyfriend Andrew Roberts on February 15, 2003.

Sicko Roberts, now 38, also murdered his and Louise’s 10-month-old daughter Tia and was jailed for life with a minimum for 24 years – reduced to 23 years on appeal – after pleading guilty to two counts of murder.

As the 20-year mark of the tragic killing approaches, Ms L’Homme’s family were heartbroken to find out that Roberts had a sordid affair with a member of his previous prison’s staff, Wales Online reports.

When the murderer was serving time as a prisoner on the Isle of Wight, he and prison officer Lauren McIntyre struck up a romantic relationship.

McIntyre, 32, was jailed earlier this year for three years after pleading guilty to misconduct in a public office.

Ms L’Homme’s daughter Demi L’Homme – who was just five at the time and staying with her grandmother on the night of her mother and sister’s death – said the news had “brought it all back” to the family.

“I think it was disgusting and absolutely mortifying,” she said.

“He deserves to be locked up for the rest of his life for what he has done, not potentially coming out in four years.

“It made me feel sick, he should be locked up, that’s what he’s there for not having the time of his life. My grandmother didn’t take it very well.”

Robert’s sentencing hearing at Swansea Crown Court in 2003 heard the defendant snapped when Ms L’Homme told him to “pack his bags” and he shouted: “Right, if it’s over nobody else will have you or the baby”.

Having taken drugs, Roberts returned to their home in Parry Street a few days later and strangled her with his bare hands before using an item of clothing to strangle Tia.

After the killing, the murderer told relatives who came calling that Ms L’Homme and the baby were staying with friends.

It wasn’t until Ms L’Homme’s uncle broke into the house two days later that her and Tia’s bodies were discovered bundled behind a mattress in the child’s upstairs toy room.

Roberts was arrested by two police officers in the car park of the Tesco store in Upper Boat five days after the murders.

The 59-year-old said: “It’s sick that he’s having a great time in prison. I’m having health problems and he’s still living it up. He’s supposed to be being punished.

“We’re trying to get on with our lives and I still think about them every day.

“With all this going on, you’re stuck in the house and you see things like that popping up. I don’t think he should ever get out.”

She added: “To be fair I can’t remember much because I was young but I still have the photographs to look back on.

“My grandmother still talks to me about her and likes to tell my little girl about them.

“I just try to get on with life as much as I can, I have got to be strong for my two little ones.”

McIntyre’s fling with Roberts took place in 2018 and text messages between the two were read out at Isle of Wight Crown Court on Thursday, January 7.

The killer was reported to have messaged McIntyre: “Today was really hot and risky but I am so needing it right now.” She replied: “So f****** risky I like it though.”

On another occasion, McIntyre messaged Roberts: “I have had hands on you so I guess it’s time you got hands on me.”

Later the same day she told him: “I still keep remembering the first time you kissed me.”