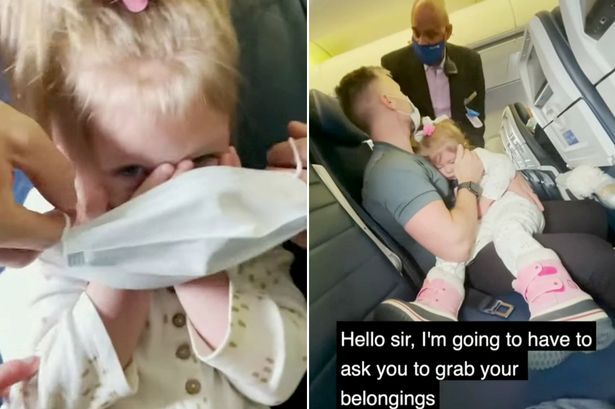 A mother of the toddler her filmed the moment an air steward removed them from their flight both were wearing a mask during the flight but her daughter continued to refuse wear a mask.

Father saying, he would hold it down on her face in the account of covering but despite that United Airlines flight attendant forced them off the plane

Eliz claims they were not allowed their baggage back when kicked off at Denver airport, leaving them without their daughter’s car seat.

The footage shared across a social media on the weekend, prompting mixed responses from viewers. Some criticized and show the negligence of the parents as well as daughter’s stubbornness but others sympathized with the family.

One viewer commented: “This is preposterous. Force your 2-year-old daughter to wear the mask.

“It will result in a tantrum and you will have to deal with the tantrum because you are the parent and she is the child.”

They added: “It will be one of the many tantrums you will have to deal with in her little life and that’s called being a parent.”

“A second wrote: “So instead of helping her husband calm her child and put on her mask.

Taking a different view another said: “That’s ridiculous, man I thought kids were exempt at that age.

“They sent the car seat WTF can you do without a car seat that’s ridiculous.”

United Airline make a statement responding to the incident: The health and safety of our employees and customers is our highest priority, which is why we have a multi-layered set of policies, including mandating that everyone onboard two and older wears a mask.

“We are investigating this specific incident and have made contact with the family. We also refunded their tickets and returned their car seat and bags.”