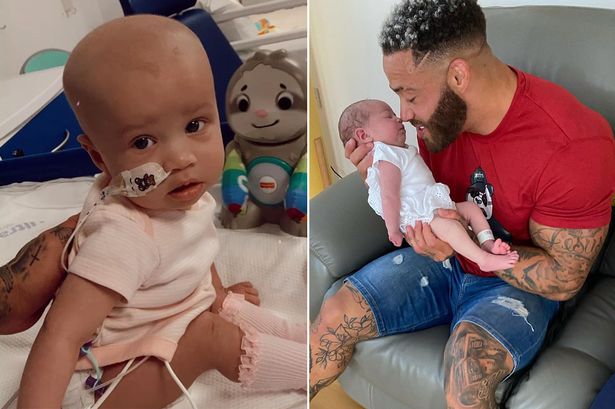 Ex on the Beach star Ashley Cain has confirmed that his young daughter’s cancer has returned.

Ashley, 30, took to Instagram on Sunday to share some adorable photos of four-month-old daughter Azaylia in hospital and updated his 628,000 followers on her condition.

Alongside the snaps of his baby girl, Ashley wrote: “We have finally found a donor for our beautiful little girl!

“It’s hard to put into words how grateful we are for everyone that’s supported, shared and registered to be a donor to help save Azaylia’s life. Thank you to everyone! It’s truly overwhelming!

“However, after Azaylia’s second round of chemotherapy, we were informed that Azaylia had relapsed and her leukaemia had returned, which highlights how aggressive her cancer is and shows how crucial this transplant will be.

“It also means she will have to go into transplant with leukaemia, which is far from what we wanted.”

“Hearing that news was absolutely devastating and has made every day 10 times harder for us and hurt even more than it already did!

“We go into transplant tomorrow for four to nine months and have been told that it’s going to be incredibly tough, that she is going to be very very poorly and it’s going to get a lot worse before it gets better!

“But we’re however doing our best to remain strong and positive for our daughter. She made it past the first stage of treatment against the odds and we truly believe that she will do the same this time around!

“She is a fighter, she will do this and we will be by her side every step of the way! LETS GO CHAMP! Please keep my beautiful daughter in your prayers,” he added.

Ashley’s famous friends were quick to comment on his post, with Jamie Jewitt writing: “You guys got this.”

Shaughna Phillips commented: “The harder the battle, the greater the success! Keep going baby girl,” while Sophie Hinchliffe added: “Praying for you all.”

Azaylia was diagnosed with a rare form of leukaemia after her birth in October, and Ashley revealed that she needed a stem cell donor in November.

YOUR HELP REQUESTED: A Call For Voter ID In All 50 States!