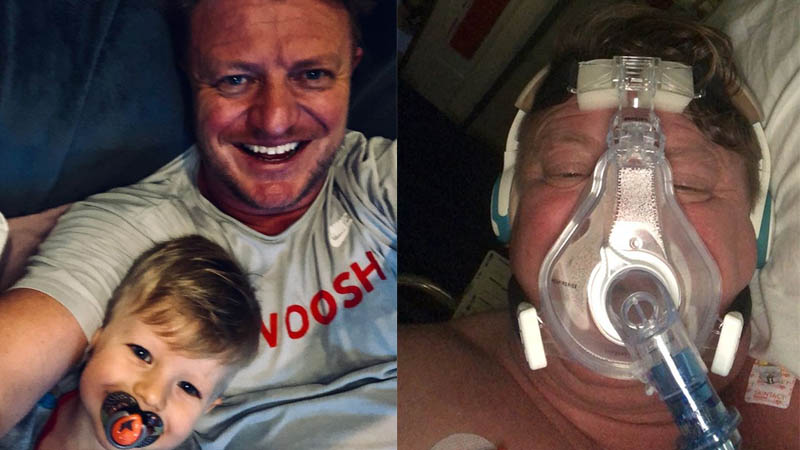 A father who survived coronavirus said the thought of returning to his three-year-old son got him through the nightmare ordeal.

Rob Flack was rushed to Treliske Hospital in Cornwall after battling with symptoms for days before realising he “couldn’t cope”.

The 50-year-old, from Ludgvan, near Penzance, said his life was saved by NHS “superheroes” and the through of returning to son, Isaac, kept him going.

The father spoke out after reading about Covid deniers filming inside the hospital, reports Cornwall Live.

he said; “It’s vitally important to get the message across about staff on ICU – the people on there work so hard to keep people alive.

“You’ve got people taking pictures of empty corridors at the hospital. The reason they’re empty is because they’re trying to keep people out of the hospital.

“I don’t understand these people. This virus is happening and it’s happening to anyone.

“I asked the doctors how they felt about seeing people not wearing masks; the anti-mask, anti-vaxers. They said they just have to bite their tongues.

“This is so, so wrong that these people are keeping people alive all day and then leave in the evening and see someone without a mask. If you can’t wear a mask, don’t go out.

“There’s no excuse for it – I’ve just been through it. I know how serious it is.”

Rob was rushed to  Treliske hospital  after not realising quite how sick he was.

“I think I took it too lightly to start off. My friend said he thought I was dead when he came and found me.”

His friend had visited him at home with an oxygen meter.

“My oxygen level was 72 – it’s supposed to be around 96/96. He rang his dad who’s a former consultant, who said ‘ring for an ambulance now’.

He was given medication including steroids on Roskear Ward at the  Truro  hospital, but he soon deteriorated.

“I stupidly thought I was feeling okay that evening and went to have a shower. I can’t really recall anything from that point on,” said Rob.

“I don’t want to say I was dying but I got to that point where I was gone. I wasn’t compos mentis. I can remember them smashing me through doorways on a trolley to get to ICU.

“I didn’t see any lights at the end of the tunnel or anything like that, but I just remember saying ‘let me go to sleep’. My head was telling me that I had to go to sleep. She was saying ‘no, no, you’ve got your boy!’”

When he arrived on Intensive Care, a face mask was placed on Rob’s face which gave him a constant flow of oxygen.

“I had this mask on and I said it to them, I can’t handle it. They told me that if I didn’t wear it I’d have to be put in a coma and put on one of the ventilators. It’s hard and took some doing – I was wearing the mask all the time for the first few days. People say Covid’s like flu, but it wasn’t anything like that. It made me feel like I wanted to go to sleep and not wake up. I’d had enough. If you haven’t got that mask on, you can’t breathe.”

He added: “They’ve learnt that the prone position is really good for treating the virus. Covid seems to glue everything to your back, to your thorax, so they want you to sleep on your front and I can’t sleep like that.

“They were getting me up at 2 o’clock in the morning, putting me in a chair when I was half asleep with a table in front of me with cushions on it, sleeping face down like that. Two days of that made a massive difference to me. They’re doing stuff like that all through the night.”

He is now at home on what is called a Home Covid Ward: “I’ve got something to test my oxygen, an app on my phone which reports back to them. It’s going to take me months to get back to how I was before, but I got out of ICU quickly – I’m very lucky.”

Rob, who was renovating a house to sell when he was rushed to hospital, wants everyone to appreciate the hard work done by doctors and nurses on the Intensive Care Unit.

“People need to realise that staff in there are doing everything they can to save lives and they have to face people outside who aren’t helping at all. They’re seeing people die every day. There was a bloke next to me who was seriously ill on a ventilator.

“I’ll tell anyone to put their mask on if I see them without it – I’ll get arrested if I have to now. It’s not about me, it’s about the staff working on ICU. What if these people weren’t around? What if they had to stop working? What if they get ill? We need these people and we should treat them with massive respect.