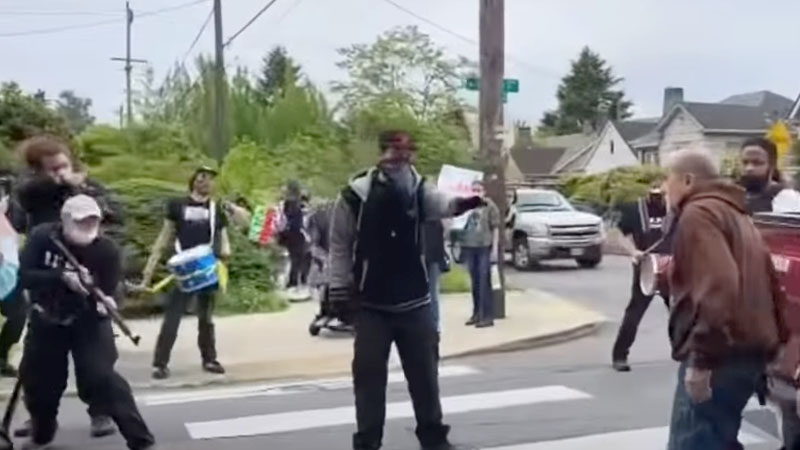 The Black Lives Matter (BLM) protests that blossomed in small towns and big cities across the nation last year awakened many Americans to systemic racism and biased policing.

According to the details, last week, a viral video showed BLM protesters blocking traffic and brandishing guns in an attempt to intimidate those trying to get through in Plano, Texas. At one point, you can see one of the protesters point a gun at the man who is yelling at them to move out of the road. But it’s what the police do that really has people talking.

Similarly, another incident took place on Thursday afternoon in Portland when they severely injured a handyman, Joseph Hall, who was unlucky enough to turn into a street where one of their ‘protests’ was.

According to Hall, he was coming home from a repair job nearby when he was cut off by a moped. Then the moped followed him and the BLM folks converged to stop his truck to cut off his truck.

“They’re screaming and yelling at me, claiming I was out there trying to run people over. That’s when I discovered a march was going on,” Hall told the Post. “I was trapped. A vehicle in front of me trapped me in. I couldn’t go forward or around.”

Hall said he stood his ground and he would “do it all over again.” Except I’m thinking this time he wouldn’t turn his back to any of them.

Hall wasn’t the only person who was harassed that day. Police received 911 calls from other motorists at other intersections who were also harassed.

“One person said people in the crowd broke out their vehicle windows, damaged tires, and sprayed them with some kind of irritant,” the police said, according to the NY Post.