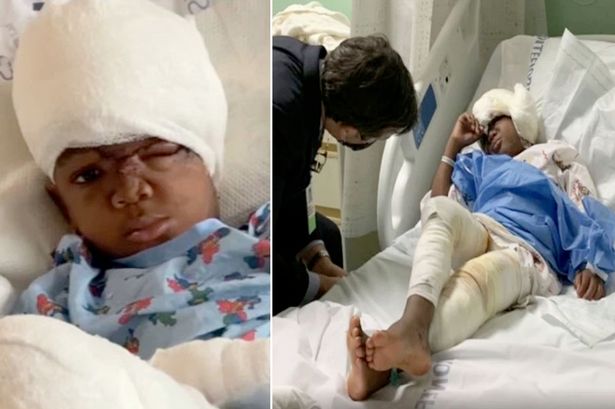 A five-year-old boy has been viciously attacked by a pack of dogs, ripping his scalp and ear off as he walked home from a sweet shop.

The terrifying incident took place on November 22, when he was discovered covered in blood with his flesh visible.

Mickele’s brothers rushed to the scene where he was still under attack by one of the dogs.

Surgeons battled to reconstruct his face, Dr. Evan Garfein, chief of plastic surgery at Montefiore said: “He was attacked by six pit bulls on his way home from the candy store.

“He lost a tremendous amount of blood. He was found by his brother with the dogs still attacking him.”

Dr Garfein had come across the fundraiser and said he wanted to help the poor boy out, reports The Sun Online.

“Most of his forehead, his left ear, part of his left cheek, major injuries to both arms and both legs.”

She told ABC13: “I saw him this morning.

“He is recuperating very fast, he is eating, he is talking, he is just amazing, amazing. I’m so overwhelmed.”

When Activists Try to Cancel Barack Obama, You Know ‘Wokeness’ Is Out of Control