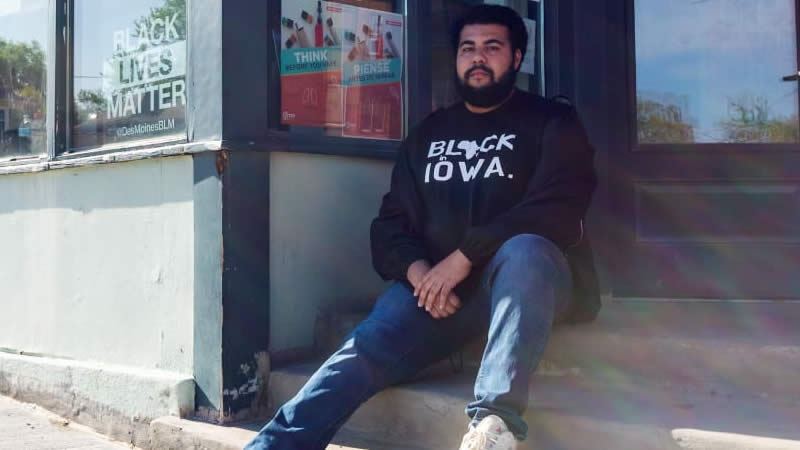 *Matè Muhammad said he knew something big was rising: As protests unfurled across the country following George Floyd’s murder last May, hundreds of people were also flooding the streets of Des Moines, Iowa, his hometown.

From Chicago, where he lived at the time, Muhammad watched livefeeds of protesters in Des Moines squaring off against police in riot gear. Some smashed windows and threw water bottles. Crowds ran from tear gas and pepper spray. This was an unimaginable sight for Iowa’s capital, which did not have a Black Lives Matter chapter, let alone massive street protests for racial justice.

It was like a train was moving, he said, and he didn’t just want to get on — he wanted to drive it.

He connected with friends and helped plan a march in Des Moines on June 3, then came home to be part of it. Since then, he has become a leader in a burgeoning Des Moines protest movement. He organized marches, moved into a house with other activists and, inspired by earlier revolutionaries like Malcolm X, changed his name from Matthew Bruce in December.

Muhammad was also arrested four times in the first four months of demonstrations over allegations that he interfered with law enforcement, vandalized a police vehicle and shined a laser beam at officers during protests, charges he’s still fighting in court. In emails obtained by NBC News through open records requests, law enforcement leaders labeled him an “agitator” and “the ringleader” of violence and disruption. But he hasn’t backed down.

“This is what I came home to do — there was no stopping me,” Muhammad, 25, said. “I was probably the worst one for police to target because I was the last person that was going to quit.”

Des Moines, a city of 215,000 where 11 percent of residents are Black, hadn’t seen protests like those of the past year since the riots over policing of Black neighborhoods in the 1960s. Inequity persisted — Iowa has one of the highest disparity rates nationally of Black people arrested for marijuana possession — but spontaneous mass demonstrations were so rare that the Des Moines Police Department had no formal crowd control policy a year ago.

During interviews over the past four months, 15 Iowa residents who joined the protests described unexpectedly finding a calling, transforming from restaurant managers and landscapers to the leaders of thousand-person marches. People who had never attended a Des Moines City Council meeting are now running for a seat.

Read the full story on NBCNews.com

The Memo: Lawmakers on edge after Greene’s spat with Ocasio-Cortez