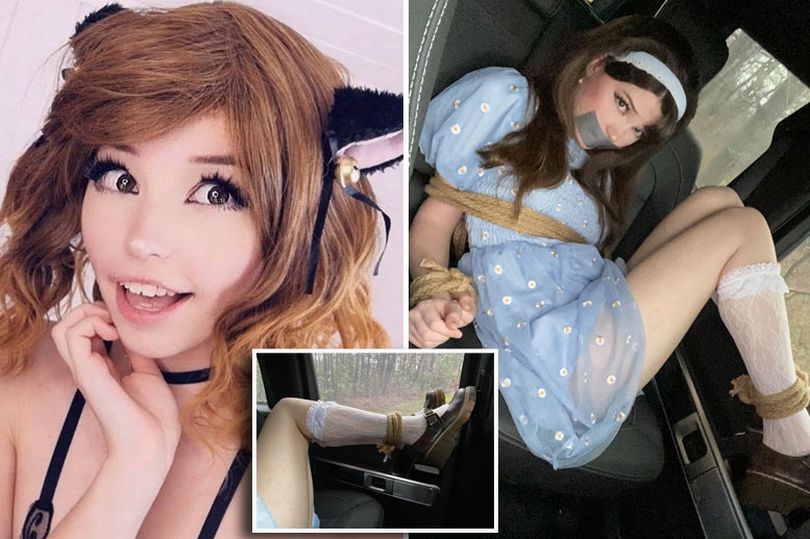 OnlyFans model Belle Delphine has hit back at critics who say a recent social media post of hers is “promoting rape”.

The 21-year-old earns nearly £1m ($1.2m) a month charging fans for saucy OnlyFans videos and even sold bath water she had “played in”.

But her latest Twitter post has left people fuming, with one person saying men will “see this and think this is normal”.

In the tweet, Belle is seen tied up with her feet and hands bound and tape covering her mouth.

She is also seen in the boot of a vehicle and then having sex with a man wearing a black/camo top and a black balaclava.

The post, which has been shared more than 9,000 times and liked more than 57,000 times, was shared with the caption: “My perfect first date.”

In response to Belle’s tweet, another user replied: “I’ve never had a problem with Belle but this is messed up and I really hope she (and everyone else) can see how this is harmful. This isn’t hot or sexy.

“It’s traumatizing and a dangerous reality. If you think this is hot, please consider getting help.”

Another wrote: “The issue isn’t having this kink, it’s the fact that a lot of males here will see this and think this is normal.

“They don’t know about the safe words, long discussions, and therapy that take place before engaging in a scene like this. They just see rape.”

Alana Evans, President of the Adult Performance Artists Guild Union, is one of the people to have criticised Belle for sharing the images.

“I think saying because I enjoy consensual non-consent is promoting rape, is the same as the argument that violence in video games promotes violence.”

She went on: “I made it very clear in the caption of my photo, and anything written about it that I was enjoying it and that is was consensual, I never said the word rape, or anything against my will.

“This is what other people have put onto it. I enjoy the idea of being tied up and used (with my consent, obviously).”

She also disputes “insane” accusations that she was “trying to dress like a child” in the photos.

She said: “No one likes rape, no one wants rape to exist.”

Adding that she consented to being tied up and having rough sex, Belle said: “I am not apologising for anything, what I did wasn’t wrong, and much more normal than people think.”

“Sex is complex and explorative, but should always be consensual,” she said.

“Do not follow me if you require trigger warnings before posts.”

The gamer girl recently claimed no one would talk to her in real life as she is “uneducated” and realised “the only real way to make money is to be sexual online”.

Belle, real name Mary, of Hove, East Sussex, told the Spectator: “No one is going to speak to me if I am sat there not wearing anything to comment on, but if I’m wearing something crazy people will say ‘That’s crazy’ and start a conversation.

“I can’t start a conversation with anyone.”

Avengers Star Gwyneth Paltrow Has Decided To Quit Acting: “I Haven’t Been Comfortable Being A Public Person”