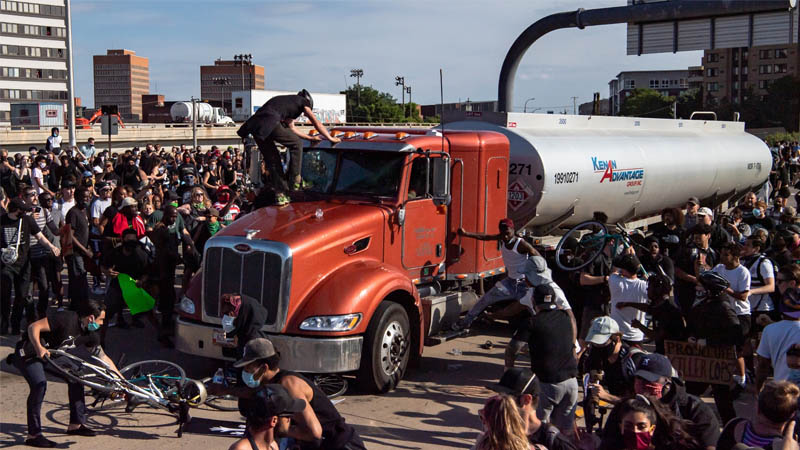 Antifa outlaws appeared to suddenly welcome and even cooperate with police only seconds after a fed-up citizen pulled a gun on them. Maybe those in power can learn something from it.

On Sunday, patriots held a “Freedom Rally” in the area of the Oregon State Capitol in Salem to “flag wave to honor those who fought for our freedoms,” The Oregonian reported.

Unfortunately, participants were attacked and harassed by a 200-strong group of antifa counterdemonstrators whom police described as “heavily armed.”

The confrontations led to four arrests, according to Salem police — but not for the man that The Oregonian claimed had “brandished a gun.”

Video footage showed the unidentified man pulling a pistol from his waistband and cocking it in front of violent radicals who were attacking his vehicle after they apparently pepper-sprayed him.

Using their usual tactics of destruction and harassment, the antifa punks spent the day hurling paint-filled balloons at passing vehicles, shining lasers in driver’s eyes and breaking out the windows of caravaning patriots who were flying American flags and other banners with messages expressing support for police and former President Donald Trump.

The man who pulled the gun on the mob appeared to be just another patriot-turned-victim — until the moment he flipped the script.

He emerged from the driver’s side and calmly stood behind his truck to address the mob, his body language suggesting he was asking them to simply back off.

But several people dressed in black with gas masks around their necks and pepper-spray cans, homemade shields, clubs and other tools of mayhem in their hands closed in on the man and his vehicle while taunting and shouting expletives at him.

As he was about to return to the driver’s side door, someone smashed the small rear passenger window.

When the man came back around to inspect the damage with his back to the crowd, he suddenly flinched, seemingly because he was pepper-sprayed or had something thrown at him.

It was then that he pulled the weapon from his waistband and cocked it.

“Get away from me!” he yelled with the pistol in his hand but down at his side.