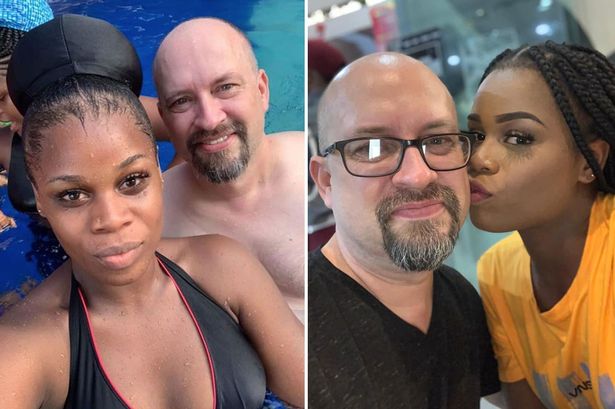 An age gap couple who met on an international Christian dating page on Facebook are engaged.

The dad-of-four liked her profile and asked if she was interested in finding a “good Christian man to get serious with”.

Despite his recent divorce, Goodness was instantly attracted to the telecommunications technician and wanted to learn more.

But their relationship was almost over before it begun after Goodness believed Titus might have been catfishing her.

She threatened to block him after becoming suspicious as the dad was too shy to show his face on camera.

Fortunately for the lovebirds, Titus plucked up the coverage to reveal his face in October 2019 and now the rest is history.

After speaking online every day for six months, the couple made plans to meet in person – but then coronavirus struck in 2020.

However in December 2020, Titus was able to make the 20-hour flight across the Atlantic Ocean to meet Goodness in Nigeria.

On the night of his arrival, the dad popped the question without hesitation – and she said yes.

The couple had a traditional Nigerian engagement ceremony with all of Goodness’ family there to celebrate.

Their celebration included a blessing of the couple, followed by a party which was filled with music, dancing and eating.

After two blissful weeks, Titus returned home but the pair hope their engagement will allow Goodness to obtain a K1 viva.

Titus admits being concerned about their age gap, but it’s his life experience and maturity what made her fall in love with him.

It also took a while for his two eldest children, Cade, 18, and Carter, 16, to adjust their dad’s new relationship.

Now Goodness is apprehensive about becoming a step-mum to so many kids, but is excited about having a new large family.

Meanwhile, trolls on Facebook have accused Goodness of being a gold digger and using Titus to enter the US.

Speaking about meeting Titus, she said: “I was looking for someone who knew exactly what he wanted and not just out to play.

“Our age gap was never an issue for me because I believe that older men are more mature, experienced and focused.

“Titus was a little bit worried about the age gap even though he was beginning to fall in love with me.

“In my country, it’s not unusual to see couples with huge age gap between them.”

Discussing the engagement, Goodness added: “It was the best two weeks of my life even though it was short.

“My mum and dad had reservations about his intentions and also about him being a divorcee with four kids.

“But as she got to talk to him and get to know him better, they have become more accepting of it.

“His ex-wife isn’t supportive of our relationship and messaged me on Instagram, asking why I was going after a man older than me.

“When we first made our relationship public on Facebook, a lot of people said I’m with him for the money or for a green card.”

Goodness hopes her application for a visa will be successful so it allows her move to the US to marry Titus.

While she knows their relationship isn’t typical, the e-commerce worker simply doesn’t care.

“So there’s bound to be people talking and questioning the true intentions of both of us in our relationship.

“My plan is to come to the US through the K1 visa application and then we hope to start trying for kids.”