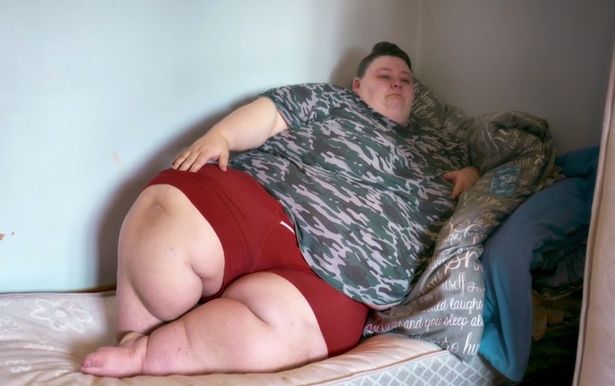 A 23-year-old who weighs 41-stone has revealed they hope to triumph in their weight loss journey so they can have gender reassignment surgery.

Morbidly-obese AJ, who was born as Amy, identifies and gender-neutral and wants a mastectomy and hysterectomy surgical (breast removal and womb removal) to feel comfortable in their own skin.

AJ was featured in last night’s episode (January 18) of Channel 4’s Shut Ins: Britain’s Fattest People and was told they would have to lose weight with dieting before weight loss surgery or gender reassignment.

Despite being so young, AJ struggles to get up and downstairs, spends 19 hours a day on a mattress, and gets breathless after just 15 minutes of walking.

At the time of filming in 2019, AJ lives in Airdrie, Scotland, with mum Sharon who does all the shopping and prepares 5,000 calories of food every day.

In the show, bariatric surgeon Professor David Kerrigan tells Sharon a lot of the blame rests on her shoulders for AJ getting so overweight – especially as it’s the mum who sorts out food.

He says: “We live in an incredibly obesogenic environment, we’re surrounded by high-calorie foods, fast foods, and we see more and more young people these days dealing with obesity.

“But to get to more than 40 stone is quite an achievement, particularly in your 20s.”

Speaking directly to Sharon in his office, he adds: “That’s not just eating an extra Mars Bar a day,

“That shopping and that food that allowed AJ to gain the weight of a whole person in less than a year, you contributed to.

“This operation could kill AJ if it went badly wrong.

“It’s a small risk. If AJ was my child I’d be thinking do I want them to go through that risk when it could be a waste of time anyway because of things that I’m doing.”

AJ’s mum bursts into tears and asks to leave the room for a while.

“It’s a tricky situation, but we might as well be honest,” Prof Kerrigan says.

AJ starts to eat more healthy food, such as fresh vegetables and rice, in a bid to lose enough weight for surgery and next week’s episode will reveal if it has worked out.

Dua Lipa opens up about her pregnancy rumours