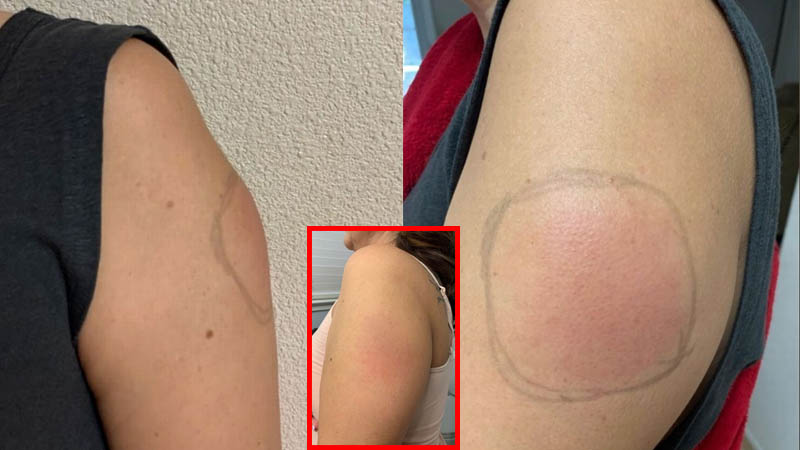 The Moderna vaccine is reported to be occasionally causing a rash-like side effect which has quickly been dubbed ‘Covid arm’.

Some people have reported that the area where the jab was received area becomes itchy and irritated in the days afterward.

One woman said her reaction was so severe she’s having second thoughts about getting the second dose – but doctors have quickly moved to allay any fears.

Amelia Brown, who lives in Visalia, California sent FOX26 pictures of her arm just days after getting her first dose of the vaccine on January 11.

Getting the shot was easy, according to Brown.

“They gave me the shot, I actually didn’t even feel it to be honest,” said Brown.

Shortly afterward however Brown began to feel dizzy and had a minor allergic reaction.

“In an over abundance of caution, they had me go and visit the hospital just to ensure that I was ok,” said Brown, “I was, I’m here, I’m happy and the next day I went to work, not a problem.”

Brown says the injection site was tender for a few days afterward, but it was nothing major.

Then, on Monday, January 18, exactly one week after her first dose, Brown says the area became itchy and irritated.

“It was just red and angry and had hives. Like you could feel the bumps.”

The very next morning, Brown says she woke up with a lump.

“It had just grown overnight from like, a dollar size to like, a baseball size,” said Brown,

“And it was very swollen, hot to the touch, sore, even if I wore my coat that day, the pressure of the coat was painful.”

Brown says she spoke with a few different medical professionals who advised her to leave it alone unless it got worse.

Dr Praveen Buddiga, an immunologist in the region, said: “‘Covid arm’ is basically a delayed type of hypersensitivity or an allergic reaction that occurs about probably 7 to 10 days afterward.”

Dr Buddiga says he sees this in about 2% to 9% percent of patients.

“They should see their doctors if it doesn’t go away in 48 hours,” said Dr. Buddiga.

He also recommends that patients with ‘Covid arm’ do three things: “Just use the method of putting ice on it, drink a lot of water, and stretch that arm and it’ll go away in less than 24 hours.”

“We have not seen a lot of those, we have seen a couple, it’s a local response and it seems to resolve within 24 hours that it shows up,” said Rick Lembo who’s the Director of Sports Medicine at Sierra Pacific Orthopedics, where some vaccines are being administered.

During the health department’s media briefing on Friday afternoon, Dr Rais Vohra, the interim public health officer in Fresno County, said: “That really is just a reflection that the immune system is doing its job.

“I mean that just means that that lady has a really good healthy immune system and the immune system is kind of kicking into gear.”

3 Ways To Start A Diet Successfully