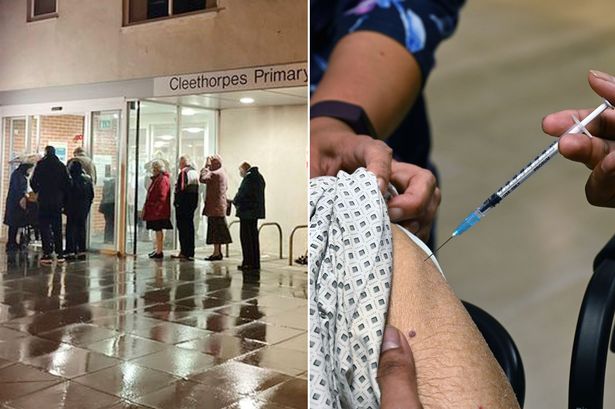 North East Lincolnshire is the place where the incident happened.  There is a huge line for elderly people and they came early in the morning for vaccine….   The first vaccinations in the region were booked by appointment at Beacon Medical Centre in Cleethorpes.

However, a line had already formed outside well before the first allotted session at 3.45pm, showing the demand from those eligible to receive it, reports Grimsby Live. Local has said the staff dis their best under the chill weather.One man who was waiting for his father inside said: “It’s alright giving them the vaccine; they’ll all end up with pneumonia waiting out here.”

Senior nurse Paula Donald said: “Well it’s been a little chaotic, it’s a completely new system on the computer so there have been a few issues to iron out, we’re getting there now though,

“We are quite used to this sort of thing with the seasonal flu vaccine but obviously this is on a larger scale.

“We’ve done a lot of training over the last few days and the staff have been fantastic, it has been a massive effort and I’m super proud of the whole team.”

It was such an awful situation for the patient That they can still waiting until their appointment time after that allowed to the reception desk after having their temperature taken.

Staff greeting the first wave invited for vaccinations tried to keep the mood light telling them “I had the vaccine yesterday as I feel fine so it’s nothing to worry about.”

“I’m really looking forward to having the freedom to do that sort of thing again.”

“There is no doubt we are winning and will win the struggle against the virus,” he says.